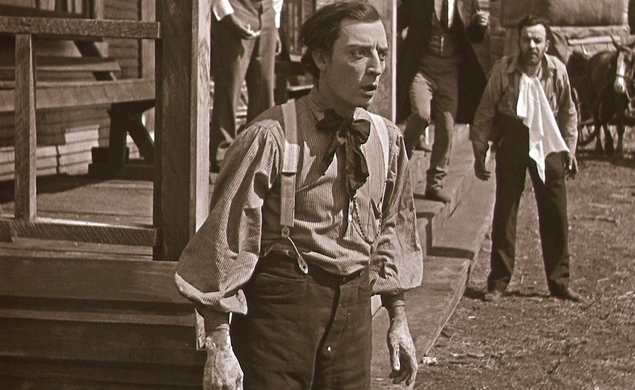 At The Los Angeles Review Of Books blog, author and college professor Anne Helen Peterson has written an article called “The New Canon.” When it was reprinted last week at Slate, though, it had a slightly different title: “The New Netflix Canon.” In it, Peterson discusses the enormous impact she sees Netflix having on her students:

“As a thirtysomething member of the middle class, I catch myself thinking that my consumption habits—I subscribe to Netflix, Hulu Plus, and full cable; I still appointment-view several shows—are somewhat typical. I’m so wrong, but not in the way I might have expected. My students taught me that. They watch Netflix, and they watch it hard… It’s so widely used that when I told my Mad Men class that their only text for the class was a streaming subscription, only one student had to acquire one… Some students use Hulu, but never Hulu Plus—when it comes to network shows and keeping current, they just don’t care. For some super-buzzy shows, like Game Of Thrones and Girls, they pirate or find illegal streams. But as far as I can tell, the general sentiment goes something like this: If it’s not on Netflix, why bother?”

Her students have seen great shows like Freaks And Geeks, Friday Night Lights, and Louie because they’re on Netflix. But they’ve never seen great shows like The Wire, Deadwood, and even The Sopranos, because they’re not on Netflix. References or jokes from Veronica Mars or Sex And The City go right over their heads. Examples from Six Feet Under don’t connect. “These shows, arguably some of the most influential of the last decade,” Peterson writes, “can’t be teaching tools unless I screen seasons of them for my students myself.”

On the one hand, that’s sort of what school is for; if the students had already seen every important television show, they wouldn’t need to take a class about television. On the other hand, it’s pretty surprising that they’ve never seen the most highly acclaimed shows of their lifetime. It’s not like episodes of The Sopranos were recorded on kinescope and are only available at academic institutions and libraries. You could (and still can) get it on DVD, Blu-ray, watch it on HBO Go, or rent or download on iTunes or Amazon. And those are just the legal methods.

These aren’t deep cuts we’re talking about; they’re kind of essential viewing. In movie terms, I wouldn’t necessarily expect a new film student to have seen Ordet, but I would expect they’d watched Citizen Kane. And if Netflix is having an impact on the viewership of young TV fans, surely it’s having a similar impact on young film fans. But what’s the impact? Is there a “Netflix film canon?”

We won’t know for at least a few years, but if Netflix really is shaping the next generation of movie lovers’ ideas about the canon, then lists of the greatest movies of all time could soon look very different. Even with thousands of titles available instantly, Netflix’s selection of canonical cinema isn’t particularly comprehensive. The site’s “Classics” section includes some great films, like Apocalypse Now, Double Indemnity, 8 1/2, His Girl Friday, and Intolerance. But the options peter out after a couple hundred movies, and that includes such “masterpieces” as Attack Of The Puppet People, The Trial Of Billy Jack, and Santa Claus Conquers The Martians.

Meanwhile standard-bearer lists like the AFI’s 100 Years… 100 Movies or Sight & Sound’s Greatest Films Poll are sorely underrepresented. None of the AFI’s top 10 American films are currently streaming on Netflix; just 14 out of the list’s 100 titles are currently available there. The pickings are even slimmer from Sight & Sound’s top 100 (or 102; they rank with ties), where just 11 movies are streaming at the moment. You'll have to look elsewhere if you want to watch Citizen Kane or The Godfather or The Rules Of The Game or 2001: A Space Odyssey or Breathless or Seven Samurai or Vertigo or Psycho (at least Hitchcock’s version; Netflix has Van Sant’s). And if students aren’t looking elsewhere, that’s troubling.

I came of age in the era of the video store, and depending on where you were shopping, the pickings for non-new releases could be really slim there as well. I used to frequent an independent store in New Jersey whose “Foreign” section was about the same size as its “Star Trek” section. Nowadays, adventurous movie lovers can find great stuff online, just maybe not on Netflix. Amazon Prime subscribers can watch Citizen Kane for free; The 400 Blows is streaming at Hulu Plus’ extensive Criterion Collection section. With these sites, and ones like Warner Archive, SnagFilms, Fandor, and MUBI, there’s wider access to classics than ever before.

But Peterson specifically says her students only use Hulu, not Hulu Plus, and basically if it ain’t on Netflix, it ain’t getting watched. Curious about the extent of this phenomenon, I asked a friend and Ph.D. candidate who works as a teacher in the cinema studies department of a well-respected university whether he’s noticed similarly narrow viewing habits among his students. He hadn’t—but fears there’s an even bigger problem.

“Most students,” he told me “haven’t seen anything at all that was made more than 30 years ago anyway. Some have never seen a black-and-white movie. Most have probably never seen a silent film.” His description makes it sound like the classics could be in trouble for reasons that go beyond just Netflix availability.

But by all means, keep watching Movie 43, currently the 10th most popular streaming title on the site according to InstantWatcher.com. It features Hugh Jackman playing a dude with a scrotum on his neck.