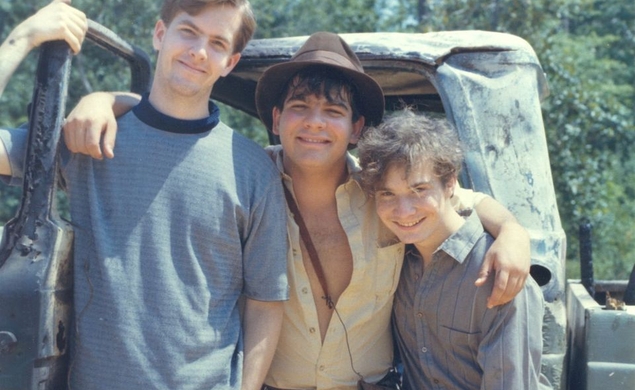 It’s one of the craziest and coolest stories in the history of movie fandom. Two pals, Chris Strompolos and Eric Zala, growing up in ’80s Mississippi become obsessed with Steven Spielberg’s Raiders Of The Lost Ark. In June of 1982, they hatch a crazy plan: they’ll remake Raiders, shot for shot. The boulder. The truck chase. The melting faces. All of it.

It took the pair and a small team of enthusiastic teenagers seven years, but, incredibly, they did it. But in the days before the Internet, there wasn’t really anywhere to show it. The guys shared copies of it with friends, but that was about it until the day a friend of a friend passed a copy to filmmaker Eli Roth. He fell in love with it and convinced Harry Knowles to play part of it during a break at Knowles annual Butt-Numb-A-Thon movie, where it “stole” the night. The Alamo Drafthouse booked the movie for a couple nights, Vanity Fair ran a massive story covering the whole incredible saga, and a legend was born. Everyone who read about Zala and Strompolos’ story agreed: this should be a movie.

Strompolos and Zala recently authored a book about their Raiders adventure, but a film version never materialized until now. Deadline reports that Jeremy Coon, producer of Napoleon Dynamite, has optioned their book, with plans to turn it into a documentary and a feature. I can see the pitch now: “It’s Super 8 with even more Spielberg influence!”

Here’s Coon on the project, at Deadline:

“I thought the movie was an urban myth but when I saw it, from a filmmaker perspective it was more inspiring than any movie I’d ever seen… These kids had done something ridiculous and impossible and the last time I had the experience of a movie being made because it was sheer fun was when I’d seen Kill Bill. I went in feeling cynical but there was no cynicism in these kids. They did the movie because they loved it. It had its première and then sat on a shelf.”

I got to see Raiders Of The Lost Ark: The Adaptation not long after the Vanity Fair article was published, at a fan film convention in Massachusetts. I agree with Coon’s assessment: the filmmaking is amateurish at times, but the enthusiasm and ambition on display is outrageously impressive and undeniably infectious. It’s one of the purest and most beautiful expressions of the love of movies I’ve ever seen.