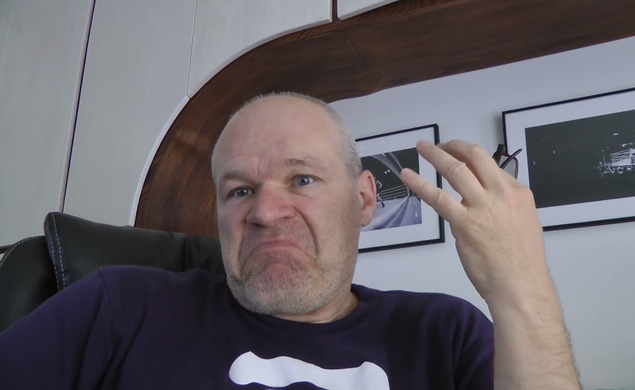 Well, we gave it our best shot. Despite my efforts in a past installment of my Roar of the Crowdfunding column to secure the necessary capital to finance the third chapter of Uwe Boll’s epically idiotic Rampage trilogy, we have failed. We’ve failed ourselves, yes, but we’ve also failed Papa Boll, and he’s not pleased. All the man asked for was a paltry $55,794 to complete the grandest cinematic vision in the medium’s history, and the most we could scrape together was barely 26 grand? There are still three days on the clock over at the ol’ Boll weevil’s Kickstarter page, but a last-minute surge seems decidedly unlikely. Now audiences may never know what has become of Bill Williamson, though previous films would lead us to believe he’s still out there, somewhere, indiscriminately murdering people for no explicitly defined reason.

Though we may gaze wistfully at the raindrops trickling down the windowpane like so many tears, Boll tends to express his disappointment in less passive ways. He recently took to the World Wide Web to air his frustrations at the public’s latest failure to bring Rampage 3 to life, having already stymied two other campaigns on IndieGogo. He recorded two videos, both embedded below, conveying his aggravation with an uncooperative studio system and apathetic moviegoing public. If you’re at work, now may be a good time to plug in your earbuds. In the first of the two clips, Boll calls out the users of Kickstarter for dragging their heels on his magnum opus.

Choice quote: “I want to do Rampage 3 because it is an important movie, but it looks like you’re easier giving $600,000 if you make a movie about some retarded wizard in the forest, or another Marvels-Avengers bullshit dirt.”

Hear, hear! I, too, have had it with all of those retarded forest-wizard movies. That’s what we love about Uwe Boll: The man speaks truth to power, though in this instance, his truth is “impotent rage” and the power is “extremely insensitive terminology.” In the second video, Boll turns his ire on the many phonies of the film industry:

Choice quote: “It is the most bullshit business, with bullshit idiots, one after the other, lined up behind each other, they’re all fucking each other in the asses.”
People now on Uwe Boll’s shit-list: Matt Damon, George Clooney, Steve Beckham [not a real person], Brad Pitt, Angelina Jolie, Ben Kingsley, Wall Street [metonymy, not the movie with Michael Douglas], the young people of today, Robert Downey Jr., Jennifer Lopez circa 2002, a cruel and pernicious god, probably Uwe Boll on some level

Setting aside the casual racism and the striking visual of Boll's imagined showbiz anal-sex human centipede, there’s a lot to unpack here. The guy’s obviously nursing a lot of inner pain. Hilarious as his unhinged, apoplectic ranting is, it still strikes me as deeply sad. It takes a special kind of sadness for a man to shed every last grain of self-awareness and cry out in the public eye against a world he clearly believes has conspired against him. It’s almost like Uwe Boll just needs a little love. I love you, Uwe Boll. If I had the requisite money, I’d fund your crazy-person home movie.