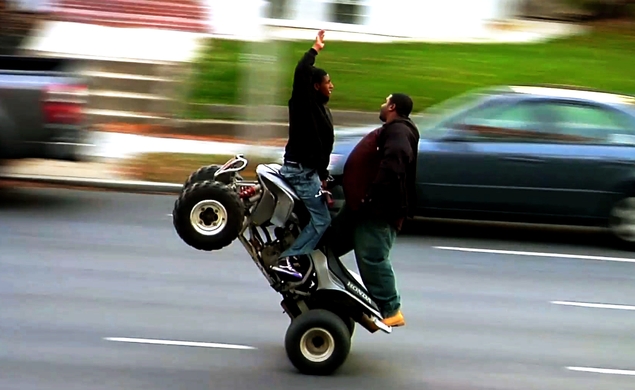 It’s no surprise that Baltimore’s gangs of black dirt-bike riders have been polarizing: Their habits of harassing motorists and pedestrians, baiting cops, and courting status among their group by attempting dangerous stunts all add up to the kind of controversial nuisance that makes some racists feel justified in flinging invective, while other pundits worry over the lack of social structure, family support, and educational development that leaves the riders bored and unrooted enough to find so much pleasure in reckless, potentially lethal behavior. Just check the comments on any article about them—or on any review of Lotfy Nathan’s documentary about them, 2014’s 12 O’Clock Boys—and try not to place any cash bets on how quickly those comments degenerate into online shouting. But 12 O’Clock Boys itself sidesteps the moral questions, and focuses on the Terrence Malick-esque beauty of the riders courting death in slow motion, and on one 13-year-old’s description of his life and the freedom he gets out of riding. Shot over the course of three years, with intimate access to the urban street-riders’ subculture, the film itself won’t end the arguments, but it is a bracing, beautifully shot dive into a highly specific group dynamic, with a narrator who takes himself and his lifestyle very seriously, and persuades viewers to temporarily suspend judgment and ride along with him. The director’s cut—11 minutes longer than the theatrical release—airs at 8 p.m. ET on SHO NEXT.