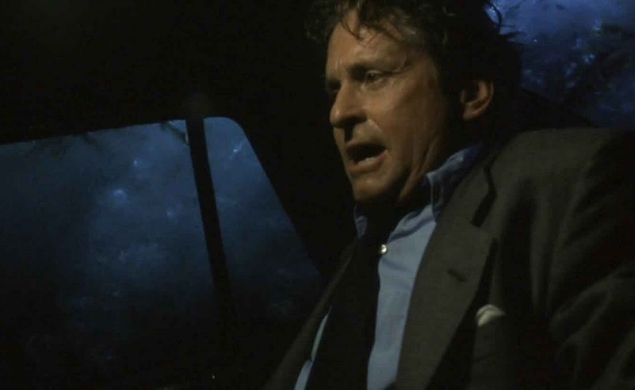 Michael Douglas makes a compelling sleazeball. That’s the dominant theme of his acting career, and the seed of the most memorable performances from his 1980s heyday, in films like Fatal Attraction, Wall Street, The War Of The Roses, Basic Instinct, and Falling Down: Even as a protagonist, he always has an air of arrogant unpleasantness, and a sense that if he were to be knocked down a peg or two, it would be both an exciting development for the film and a net gain for the universe. That’s part of the dynamic at work in David Fincher’s 1997 thriller The Game, in which Douglas plays the latest in a series of snappish, jaded rich assholes who winds up in an overwhelming situation beyond his control. Egged on by his brother (Sean Penn, who only has a few scenes but gets the most memorable dialogue, including the line “They just fuck you and they fuck you and they fuck you, and then just when you think it's all over, that's when the real fucking starts!”), filthy rich San Francisco financier Nick Van Orton (Douglas) signs up for what would today be called an alternate-reality game, a live experience designed to inject excitement into his life. But almost immediately, the game turns into a scam that seems destined to leave him broke and probably dead. Fincher brings in the same stylish verve and love of dark grit he’s brought to other disaffected-white-male-sleazeballs-in-trouble movies like Seven, Fight Club, The Social Network, and Gone Girl, and as with those films, the lack of clear boundaries and rules, and the sense of outsized punishment for any transgression, is part of the thrill. The Game is minor Fincher by comparison with any of those films, but like so many of Douglas’ characters, this film is enjoyably trashy, with plenty of edge. It plays at 11:15 p.m. Eastern on the Sundance Channel.