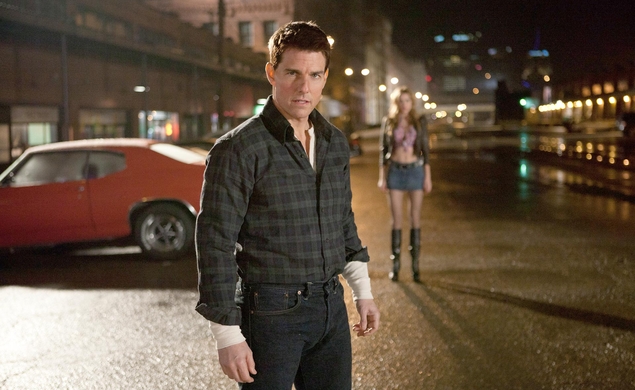 Tom Cruise, one of our last genuine movie stars, should probably stop doing action films for the sake of his physical well-being. The guy runs, jumps, falls, and pummels himself in every movie; the scene in which Cruise stands shirtless on a building ledge in Brad Bird’s two-hour adrenaline rush Mission: Impossible—Ghost Protocol shows a man with the face and hair of a 30-year old and the body of a battered and bruised 50-year-old stuntman. Not more than a minute after we see the damage a career in action does to one’s body, Cruise leaps off the building ledge.

Cruise seems to have a “comeback” role every few years, which makes no sense, since he hasn’t had a major lapse of more than three years between good films since the one-two punch of Magnolia and Eyes Wide Shut in 1999. In 2002, he starred in Steven Spielberg’s brilliant head-trip Minority Report, and in 2004 he gave his best performance to date in Michael Mann’s digital-noir Collateral, using his good-boy charm to infuse a sense of insidiousness into his elusive hitman. The next year was Spielber’s War Of The Worlds, which only looks better with each passing year; 2008 Tropic Thunder; 2011 Ghost Protocol; and last year, he deconstructed his own persona in Edge Of Tomorrow.

Of course, scattered among those gems is some forgettable stuff, including Christopher McQuarrie’s 2012 Jack Reacher. An adaptation of Lee Child’s popular and pedantic book series about a former military agent who beats up bad guys by the bushel, Jack Reacher is Cruise on cruise control (sorry, I had to). It looks, sounds, and probably smells generic, the Sam’s Choice of action films. Werner Herzog, playing the bad guy who’d rather lose a few fingers than die, is the sole redeeming quality, and he dies at the end. Of course, the film is now getting a sequel, but there’s an almost interesting twist: Edward Zwick is slated to co-write and direct.

According to Deadline, The Last Samurai team of Zwick and Marshall Herskovitz has been hired to rewrite Richard Wenk’s screenplay for the Jack Reacher sequel, which will be based on Child’s Never Go Back. Deadline describes the plot of the novel as follows:

In it, Reacher heads back to his old military base in Virginia to take a woman to dinner who is now the commanding officer. By the time he gets there, she has been arrested, and Reacher finds himself being charged with pummeling one guy and fathering a child with a woman. He can’t remember either transgression but gets to the bottom of it with cunning and sometimes brute force.

I’m a staunch, unwavering fan of Tom Cruise. He has an inimitable presence that more than makes up for his lack of range; if we could somehow tap his charisma and convert it to clean energy, we wouldn’t need oil anymore. Swapping out McQuarrie for Zwick, who has admittedly also never made a great film, is an interesting move, but it’s hard to get excited over Jack Reacher 2… unless they somehow bring back Werner Herzog.