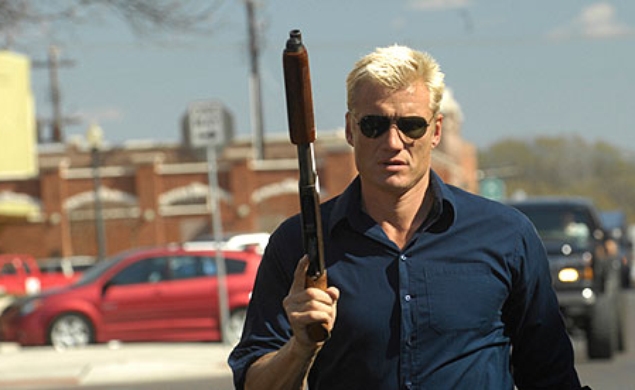 Grantland’s Alex Papaddemas has an emotional conversation with Dolph Lundgren:
“The reason I became an actor [instead of] being a chemical engineer — I was gonna be an engineer, but I found something in the arts. The creativity, the fact that you could lose yourself playing a character — it was something that I really wanted to do. I felt that I had a need for it. I didn’t really connect all the dots, but it comes back to the fact that when I was a kid, I had some traumatic experiences, and I think those experiences helped me become a fighter and an actor. It had to do with my dad mostly, like a lot of young men who end up in contact sports. And after I got divorced a few years back, I met this girl. My new girlfriend. She realized that I had some problems. She said, ‘You know, you should try therapy.’ I was like, ‘That’s bullshit.’ I always heard people say, ‘Oh, you need therapy,’ and I’d always say, ‘Screw that, I don’t need that. I’m an actor, what are you talking about?’ ”

Location scout Nick Carr tells The Guardian why “the New York beloved of the movies doesn’t exist anymore”:
“The trajectory of this unfortunate shift in New York film-making is perhaps best exemplified by looking at how Coney Island has been portrayed throughout film history. Since the dawn of cinema, Coney Island has been a beloved shooting location. From the early 1900s through the 1950s, film-makers emphasised its glorious, one-of-a-kind splendour, from silent shorts starring Fatty Arbuckle and Buster Keaton through the seminal 1953 cinéma vérité classic, Little Fugitive. As Coney Island’s fortunes shifted into decline in the 1960s and 1970s, its portrayal in the movies followed suit. Allen emphasises this in Annie Hall by contrasting the nostalgic perfection of the park from his childhood to its then desolate state. By 1979, it was so dilapidated that The Warriors was able to depict it as a post-apocalyptic wasteland with only minor changes.”

Fandor’s Justin Smith on what the Cannes lineup of 30 years ago can tell us about the Cannes lineup of today:
“Long before the 1985 edition of the festival, Cannes had become a barometer of the cinema industry’s health, both financially and artistically. The success of the market has increasingly relied on the monetary power of America, which remains as of 2014 the top buyer during the festival. If the market is a judge of financial wealth and influence in the world of cinema, it is the festival’s official competition that should be the gauge of its artistic health. Its ability to showcase a diverse group of filmmakers from a variety of established and emerging nations has become key in measuring the festival’s success. The 2015 edition has come under similar scrutiny as 1985’s for its lack of geographic diversity in particular, but in the present case, it has been accused of catering a bit too much to French films (as six out of the nineteen films  in competition are ‘visibly’ French—though at least three additional films were produced in part with French money). While cultural critics such as Jean-Michel Frodon see this as a potential threat to Cannes’ supremacy as the most important world film festival, ultimately the French cinema focus is not seen as as much of a problem as Hollywood itself. The biggest worry with the 2015 festival is that in catering so much to French filmmakers, it leaves the rest of the world shopping elsewhere for a showcase. And yet, while in recent years Cannes has premiered some questionable blockbusters, arthouse films still (of course) reign and diversity remains an important pillar in the festival’s foundational influence.”

Kill Screen’s Chet Betz argues that eXistenZ is the only videogame movie we’ll ever need:
“eXistenZ is to Cronenberg as Mirror is to Tarkovsky, 8 ½ is to Fellini, Persona is to Bergman. It is a chillingly incisive self-summation, a piece of art about the artist that is so fully about its subject that it is not just about itself and its author, it is about art, and is so quintessentially about art it is then in extension about art’s subject … which is, like, you know, existence. Cronenberg seems the type of fellow more prone to have his nose in a book then sweating on a game controller, but by tackling the subject of videogames as they were in the midst of becoming more ‘real,’ he stumbled upon his perfect muse. With eXistenZ Cronenberg has a thematic skeleton key, and he sets off in the direction of opening every door ever. The film’s entendres are exponential. Its layers shift and peel back, revealing more layers, and those layers are made of layers. You might say the movie is about a virtual reality game designer (but VR that makes Oculus Rift look like Pong) played by Jennifer Jason Leigh who is being protected, sort of, by Jude Law’s character from a plot against her life in a nebulous, non-descript, but meticulously detailed future. Except that eXistenZ is not about any of that, at all. Those are merely plot points that seem to happen. They are tokens of a narrative, much in the way that a game pretends to tell a story as actually, really, there is only the game.”