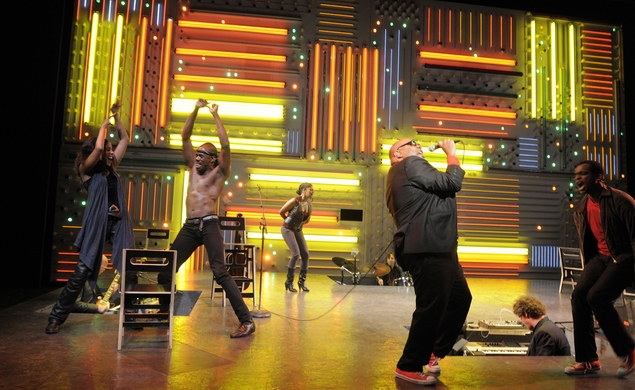 Stage plays often change their nature when they hit film: The closer the camera gets, the more it captures the artifice of makeup, costumes, and painted flats, and the stranger theatrical performances pitched toward the back rows come to feel. But the right kind of play comes alive on film, when the filmmakers can get close enough to capture the sweat and intensity of a live performance. That’s the case with Passing Strange, Spike Lee’s energetic filmed version of the autobiographical Broadway musical written by and starring Mark “Stew” Stewart. Stew puts his coming of age as an angry, frustrated black musician into music, covering a range of musical genres in the process, so his personal progress merges with the progress of music from gospel to blues to R&B and rock. Presented on a minimalist, stylized stage full of lights and dancers, Stew’s show brims with energy and catchy tunes, but also with youthful rage and aging acceptance, as it explores one man’s dealings with racism in South Central L.A., his escape to Europe and his artistic flowering in the relative social freedom there, and his honest recriminations about his own mistakes. It’s a solemn, joyous, and above all, intense show, captured live in the moment, in a close-up way that makes older-and-wiser Stew angrily confronting the actor playing his younger self feel shockingly intimate and personal. Passing Strange airs on Showtime Next at 4 p.m. Eastern, and is available On Demand and via Showtime Anytime.