Rob Riggle to play to twins in Dumb And Dumber To 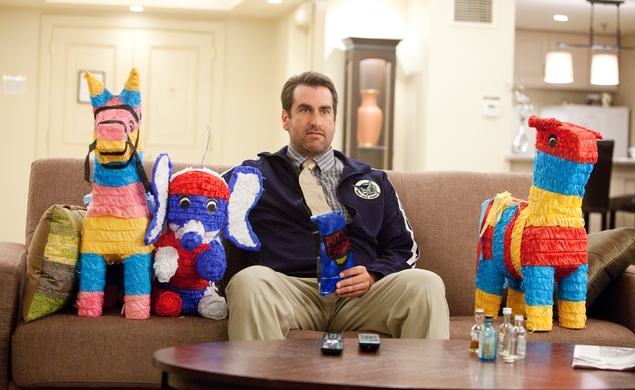 Making a sequel to a 20-year-old movie is usually a really dumb idea. But when the movie getting that sequel is Dumb And Dumber… well, it’s still a dumb idea, but in that case dumbness is a virtue instead of a weakness. I have no doubt that Dumb And Dumber To, from the Farrelly Brothers and stars Jim Carrey and Jeff Daniels, will be incredibly dumb. And that’s why it will be glorious.

And it shall have a cast that is glorious as well. In addition to Carrey and Daniels, the new Dumber will feature Kathleen Turner, Rachel Melvin, Laurie Holden, and now Rob Riggle, who, according to The Hollywood Reporter, has signed on to play both members of a set of twins. Here’s how THR describes the movie and Riggle’s part(s):

“Jim Carrey and Jeff Daniels are reprising their roles as dim-witted best friends Lloyd and Harry who hit the road to find Harry’s long-lost daughter to donate a kidney for a transplant. Riggle has the plum part of playing twins, a handyman named Travis and his unstable brother, Captain Lippencott.”

Riggle plays an unstable dude named Captain Lippecott? This might be the dumbest and best idea in history. I can already see the For Yoor Consideration Oscar ads.