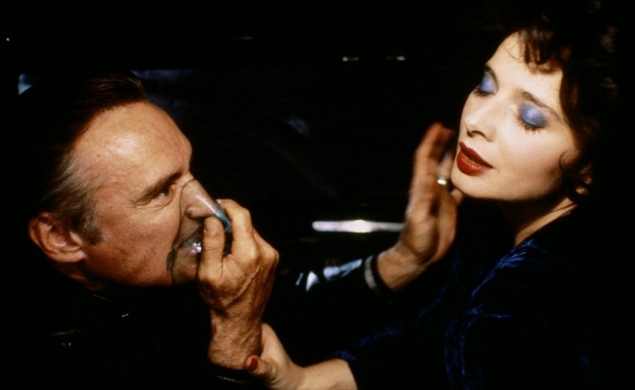 All David Lynch’s feature films before Blue Velvet feel like career-launcher projects, but for a series of very different careers. The Dissolve has talked at great length about Eraserhead’s oozy, surreal horror, but it can be hard to reconcile that jarring experimental film with the graceful Joseph Merrick portrait The Elephant Man, or the hushed, gasping space opera of Dune. Taken together, these three films feel like an early snapshot of an auteur who believed he could do anything, but hadn’t yet decided which anything he wanted to do.

Then Blue Velvet snapped Lynch’s career into focus. Coming directly out of Dune, continuing that film’s partnership with producer Dino De Laurentiis and star Kyle MacLachlan, Blue Velvet seems like a strange choice—a bleak suburban mystery, saturated with sex, violence, and violent sex, with no spaceships or interstellar messiahs in sight. But this was the film that established Lynch as a purveyor of queasy narrative nightmares, rather than just vivid surrealism. This was the film that married his queasy, dreamy sense of remove from reality with a tense storyline, which starts when Kyle MacLachlan’s naïve young character finds a severed human ear in a field. Blue Velvet is packed with profanity and obscenity—and it’s very clear about the difference between the two—but the shock value isn’t the point. What’s important is the way Lynch found ways to tell a modern, real-world story about actual people, without losing sight of the eerie disconnect that marks so much of his work. It’s worth watching just for the explosive, terrifying Dennis Hopper performance, but it’s also a significant milestone along Lynch’s path of finding his voice. Blue Velvet airs at 9:50 p.m. Eastern on Epix Drive-In.