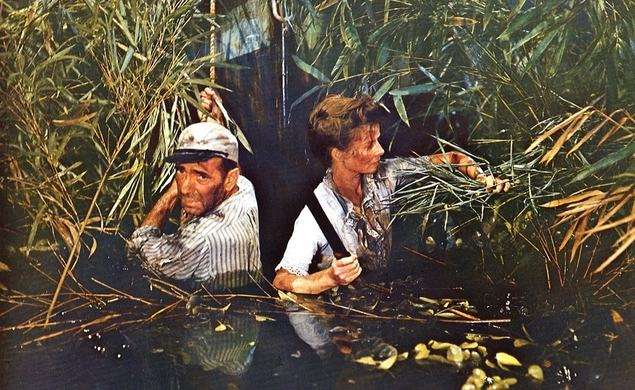 John Huston’s 1951 classic The African Queen was a notoriously difficult shoot, as co-star Katharine Hepburn documented in her fragmented autobiography The Making Of ‘The African Queen,’ or How I Went To Africa With Bogie, Bacall And Huston And Almost Lost My Mind. Much of the cast and crew got dysentery, Hepburn included; malaria also made the rounds. It was suffocatingly hot and humid, there were poisonous snakes to contend with, and Hepburn had to keep a bucket nearby so she could vomit between takes. None of this exactly shows up on the screen, though there probably wasn’t a lot of acting involved in making Hepburn and her co-star Humphrey Bogart look wan, filthy, and sweaty. But the film is one of Huston’s best, standing up to The Treasure Of The Sierra Madre, The Maltese Falcon, Key Largo, and his other handful of greats. Bogart (who won the Best Actor Oscar for the film) plays against type as Charlie Allnut, a meek, even servile riverboat wrangler who runs across Hepburn’s stern, prim missionary Rose after the German advance in World War I-era Africa. With her brother dead at the hands of German troops, and their mission burned, she has little left to live for, and she insists Charlie help the war effort by sending his battered wreck of a ship against a German warship. It’s a surprisingly terse and yet romantic adventure, as the two of them clash, then come to terms with each other and their unlikely mission. The African Queen plays on Encore Classic at 3:45 a.m. (for the insomniacs) and 11:50 p.m. (for the insomniacs who haven’t even tried to go to bed yet), Eastern Time.