George Clooney fights robots, flies in a bathtub-spaceship in the new Tomorrowland trailer 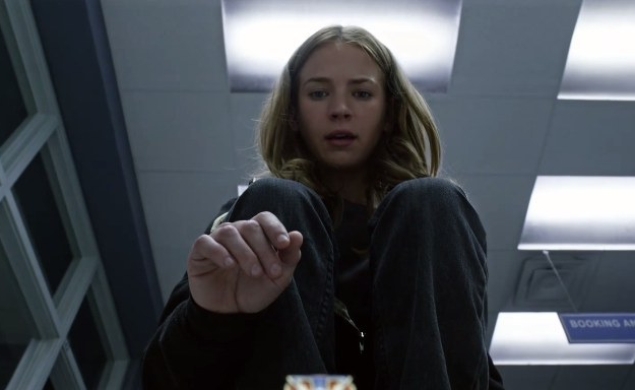 In January 2013, a mysterious image appeared on Brad Bird’s Twitter profile. Accompanying the image were a trio of words at once obvious yet abstruse: “The Box… opened.” The cardboard box bore a label reading That Darn Cat! (the 1965 Disney film), upon which was slapped a newer, cleaner label that said, simply, “1952.”

The box, a sort of wunderkammer, harbored some Technicolor film, a vinyl record wrapped in a sleeve, a copy of the NASA history book Model Research, and a 1928 issue of Amazing Stories, which contained one of Philip Francis’ early Buck Rogers stories. Fan theories proliferated, ideas eddied, and Bird remained mum.

Eventually, it became known that Bird was working on a film scripted by Lost alum Damon Lindelof known as 1952, which eventually became Tomorrowland. Bird first spilled some tidbits on the film at last year’s Comic-Con; the next day, the first teaser emerged. Channeling J.J. Abrams, Bird and co. have taken their sweet time revealing details, allowing the enigma known as Tomorrowland to unfurl slowly and deliberately, an admittedly welcome change from the relentless onslaught of leaked trailers.

It’s pretty amazing that Tomorrowland remains just as enigmatic only four weeks before its premiere. In a world where fans demand teasers before films have even begun shooting, the opacity enveloping Tomorrowland, purportedly inspired by the Disney theme park, warms the cinephile’s soul. The first full trailer appealed last month, raising more questions than it answered. Now we have a newer, fuller trailer, though it still withholds far more information than it divulges.

The new trailer packs a heckuva lot of slam-bang action into its two-minute runtime, with stoic robot dudes losing robot appendages and getting diced by lasers; George Clooney flying in a bathtub-spaceship (a potential sequel to Hot Tub Time Machine?); and those O-shaped ray guns that were so popular in old retro-futuristic sci-fi films and the subsequent neo-retro-futuristic sci-fi films.

As we saw in the last trailer, Britt Robertson accidentally (“accidentally”) receives a magic pin that transports her to a strange place, though she seems to simultaneously remain in this world. (She bumps her head into a wall in this world while meandering in the other). Curiouser and curiouser. She goes to George Clooney’s house, which Clooney has outfitted with heavy-duty shutters, lasers, cameras, and myriad gizmos and doodads. A gaggle of mystery men show up to capture Robertson, and Clooney springs into action. (He seems to be a much better secret agent/handyman here than in Burn After Reading.)

The trailer promises the same kind of boundless imagination and clever irony of Bird’s previous films (and his eight-season tenure on The Simpsons), all of which are certifiably great, particularly The Iron Giant, which was dumped into theaters in 1999 and is now considered one of the great animated films. Bird made his live-action debut with the mega-hit Mission: Impossible—Ghost Protocol in 2011, an unexpectedly hilarious and thrilling addition to a series that showed signs of stagnation.

Drawing inspiration from the 1939 World’s Fair (which drew inspiration from the ascension of fascism and, in retrospect, an uncomfortable idolatry with war and technology, as Wired points out), Tomorrowland looks like quintessential Brad Bird, a film of dazzling images and humane emotions.