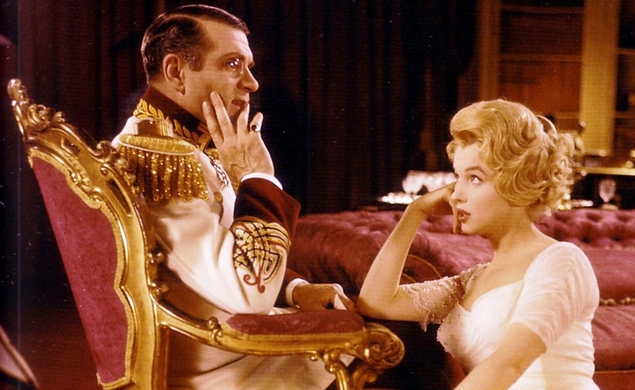 Back in 2011, the disingenuous romance My Week With Marilyn laid out a much-fictionalized version of Colin Clark’s hilariously hateful, arrogant memoir about serving as a production assistant on a 1957 film directed by Laurence Olivier, and starring Olivier and Marilyn Monroe. In Simon Curtis’ film, Clark (Eddie Redmayne) and Monroe (Michelle Williams) enjoy a gauzy, delicate romance together; he’s a stunned schoolboy staring at a star, while she’s a damaged, fading rose, dealing with the stuffy dictates of an unsympathetic, aging Olivier (Kenneth Branagh). In the memoir, however, she’s a drug-addicted, erratic source of constant frustration, never on time, never familiar with her lines, barely capable of functioning from one scene to the next, and dragging the whole production down on her slow fall into oblivion.

Both versions of that story are self-serving, but here’s a way to judge the truth: The movie Olivier and Monroe were making during that period, The Prince And The Showgirl, is airing this afternoon. It’s no Gentlemen Prefer Blondes, but neither is it as Clark describes it, a teetering disaster centering on a cynical matchup between a talentless, blowsy disaster hunting for respect, and an aging hack hunting for relevance. It’s actually a fairly lively and complicated battle-of-the-sexes comedy, with Monroe as a world-wise stage actress who’s perfectly aware of how men react to her body, and Olivier as a puffed-up Carpathian regent visiting Britain, and expecting the shapely locals to throw themselves at his feet, or more aptly, into his bed. The chemistry between them isn’t particularly sexual or even romantic, but their characters’ fencing and attempts to manipulate each other are surprisingly lively and ribald, with a quick-and-easy lay as his ultimate goal, and something halfway between love and stability as hers. In spite of Clark’s sneering in print, Monroe comes across as charming and on her game, and the script is surprisingly frank and playful, while throwing in some broad comic twists. The film airs at 1 p.m. Eastern on TCM.