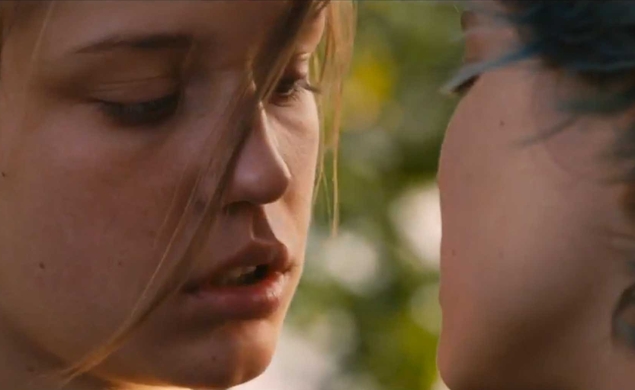 The bad vibes surrounding Abdellatif Kechiche’s Palme d’Or winning lesbian love story Blue Is The Warmest Color just won’t die down. To recap briefly, in an interview published at the beginning of this month lead actresses Léa Seydoux and Adèle Exarchopoulos said that making the film was a “horrible” experience as a two-and-a-half month shoot spiraled into a grueling five, and that Kechiche was a “tortured genius” neither would ever work with again.

Kechiche promptly responded while promoting the film in Los Angeles by taking a dig at Seydoux’s privileged background (her grandfather is the CEO of Pathé, one of France’s biggest film and TV production houses, while her great-uncle is the president of another huge film company, Gaumont), saying she wouldn’t have said what she said if she “hadn’t been born in cotton wool” and that she was “part of a system that doesn’t want me as I trouble it.”

Kechiche also claimed the film went way over schedule because Seydoux was “incapable of entering the part.” For her part, the actress has stayed consistent in her subsequent statements, maintaining her pride in the finished product, her respect for Kechiche’s talent, and what an appalling experience the shoot was nonetheless. “As a director and as a person I would never say something bad,” she said in a typical recent statement. “It’s just that it was horrible—the shooting was horrible.”

But Kechiche is staying angry in a new interview he’s given to the French magazine Telerama (an item first picked up on in English by The Playlist’s Kevin Jagernauth).  The director says that now, because of the row, “the film shouldn’t be released, it has been soiled too much. The Palme d’Or had been a brief moment of happiness; then I've felt humiliated, dishonored, I felt rejected, I live it like I’m cursed.”

As for charges he’s a bully? “I do not have a sense of power over them,” Kechiche said. “Instead, it’s the characters and performers who hold the reins. They have the power to seduce me, to move me, to amaze me. I am a prisoner of the players that I chose.”  And as far as choosing players goes, Kechiche added that he wanted to replace Seydoux as early as 20 days in.