Jim Carrey and Jeff Daniels: Reunited and it feels so dumb 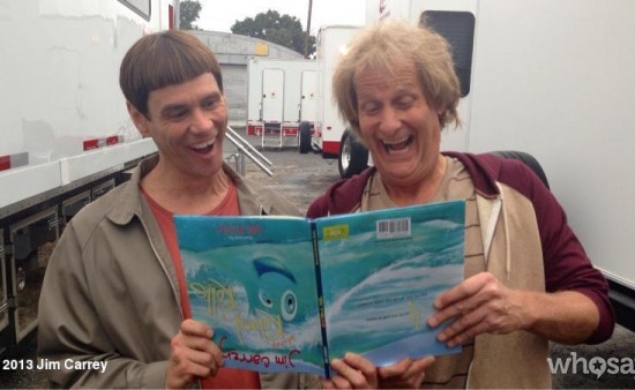 Exihibiting a flair for cross-promotion that is anything but dumb, Jim Carrey pimped the release of his new children’s book How Roland Rolls by posing for a picture as Lloyd Christmas alongside Jeff Daniels as Harry Dunne from the set of their upcoming sequel Dumb And Dumber To. It’s our first full look at Carrey and Daniels in character as Lloyd and Harry in almost 20 years. And, yeah, they still look pretty stupid:

How Roland Rolls comes out TODAY but it may be a little too sophisticated for Lloyd and Harry! Yep... THEY'RE BAAAAA… http://t.co/bhrYxNPKbv

According to Amazon, How Roland Rolls is “a story about a wave named Roland who’s afraid that, one day, when he hits the beach, his life will be over. But when he gets deep, he’s struck by the notion that he’s not just a wave—he’s the whole big, wide ocean! The story shows humanity’s interconnectedness through the metaphor of a wave in the ocean.”

Yes, we are all connected. A butterfly can flap its wings in Beijing and affect the weather in Central Park. And two goofy looking guys can take a picture in Los Angeles and get a man in Brooklyn to post it on this website for all the world to see. So expand your consciousness, guys. That’s what Dumb And Dumber To is all about. Well that and fart jokes.