Hold the Bat-Phone: Adam West and Burt Ward are working on a new animated Batman movie 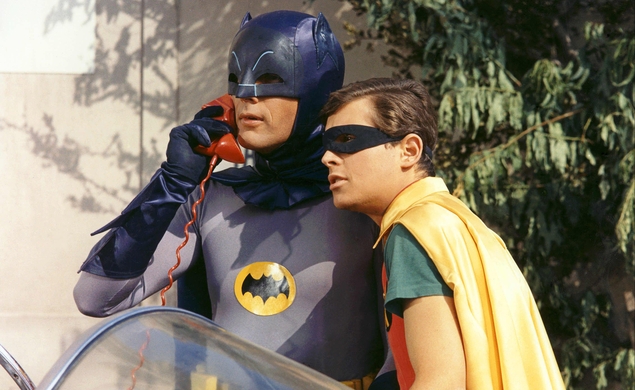 Bat-newsflash: Adam West is still kind of a prima donna. Attendees at North Carolina’s Mad Monster Party horror/science-fiction/fantasy convention this weekend got a reminder when West and Burt Ward, stars of the ultra-camp, cult-hit 1966 Batman TV series, announced that they’re going to be voicing Batman and Robin again in a 90-minute animated Batman film. Or, more specifically, when Ward feinted at breaking the news, then paused to check with their agents to see whether he was cleared to reveal it yet—and West upstaged him by magnanimously granting him permission. “Yes, we can,” West pronounced. “I tell them what to do.” There’s the old bat-arrogance. Here’s the 38-second clip from the con where they dropped the news:

West apparently didn’t order his agents or his old sidekick to reveal much more about the upcoming film. It’s set for release in 2016, to celebrate the 50th anniversary of the 1966 live-action TV show. It may be one of a dynamic duo of animated West-and-Ward Batman features, though that hasn’t been settled yet. They didn’t specify whether it’s going to be another arch, ’60s-style campfest, complete with an overly excited narrator, silly deathtraps, and wacky screen-splash sound effects whenever a hero or a villain takes a big hit. (“Glurpp!” “Clunk-eth!” “Vronk!” “Zlott!” ran some of the actual ’60s-series Bat-fight words.) Granted, it’s hard to imagine Ward and West, with their stiffly stylized delivery, doing a serious Batman, but we haven’t heard their growly grim-n-gritty voices yet. Who knows, maybe they’ll both turn out to have an inner Christian Bale to channel. But more likely, this will be a nostalgia project like the Batman ’66 series, which launched in 2013 to kick off DC Comics’ DC² digital-comics experiment.

Fans of the 1960s series—or maybe “fans” in flashing animated quotes, since the show was all about kitschy ironic appreciation—haven’t had an actual Bat-feature to call their own since 1966’s Batman: The Movie, which memorably featured West jogging around Gotham trying to find a safe place to huck a bomb, fending off an exploding shark with shark-repelling Batspray, and getting saved from a torpedo by a heroic martyr dolphin. (Also lots of lengthy, lackadaisical loops of ludicrously alliterative language.) Given how much big nonsense the live-action movie managed on a tiny budget, it’s hard to imagine what hijinks the makers of a Batman ’66 movie could get up to given the freedom of animation. At least poor Burt Ward won’t have to have his costume literally painted onto his legs again.

But here’s the big question: Will an animated Batman ’66 have to have live-action “Vronk” and “Zlott” panels to stay stylish and outré? Tune in next year to find out, true believers. And until then, feel free to boost the nostalgia by listening to the ’66 Batman theme for infinite hours on the Infinite Jukebox until your brains come rolling out of your ears, which incidentally is good preparation for watching anything Batman ’66 related.