Hat in hand, the third Atlas Shrugged launches a Kickstarter 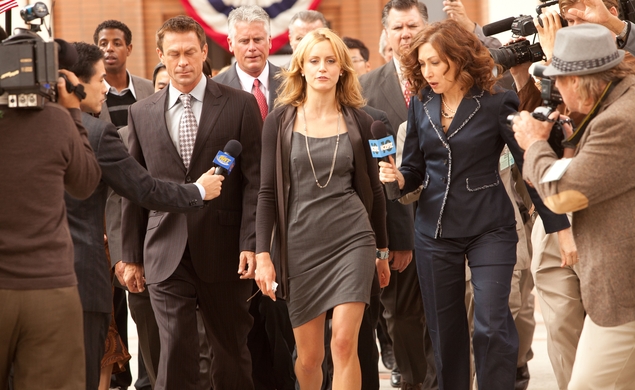 Released on Tax Day 2011, Atlas Shrugged: Part I (starring a pre-Orange Is The New Black Taylor Schilling) was an adaptation of the first third of Ayn Rand’s sci-fi ode to the virtues of capitalism and selfishness. The book is a touchstone for many conservatives, including John Aglialoro, chief executive of exercise equipment manufacturer Cybex, who finally produced the first film after 19 years of expensive development. The final cost was about $25 million (with only about $5 million going into the actual production) but it didn’t yield fiscal results, making $4.6 million. Undaunted, Aglialoro put another $5 million of his own money into Part II, with outside investors helping make up a $10 million budget for production and another $10 million for marketing. That installment was released a month before the presidential election last year and did even worse, grossing only $3.3 million domestically.

Undaunted, Aglialoro and producer Harmon Kaslow have launched a Kickstarter today to raise funds for the final installment. Atlas Shrugged: Who Is John Galt? is also supposed to be released at a politically significant time (just ahead of next year’s midterm elections), which means shooting needs to begin this fall. That means it’s important to raise fundraising awareness as quickly as possible. “There is an incredible amount of vitriol out there and we have every intention of capitalizing on it this time around,” Kaslow said to The Hollywood Reporter’s Paul Bond. “The day we launch the Kickstarter campaign, those haters are going to come alive. They’re going to come after us in droves, attacking us everywhere online. To them, we say, thank you.”

“It’s gonna be a great movie,” Aglialoro says in a video included on the Kickstarter page. “It’s gonna be the best of the three in terms of it’s going to say what we want it to say.” As far as the goal of the funds being raised, screenwriter Duncan Scott says that the more money you have, the “bigger palette” you metaphorically have. “It’s going to be made, but let’s add as many colors to that palette as we can,” he says. The Kickstarter’s seeking to raise $250,000, with the usual tiered incentives tied to various donation levels. For $500 or more, for example, “your name and picture (optional) will appear in a ‘Special Thanks’ slideshow feature on the DVD and Blu-Ray forever cementing your place in the Atlas Shrugged legacy,” for $2,500 you can spend a day on set (“The catering is great”), and for $7,500 you can have your name carved into John Galt’s house.