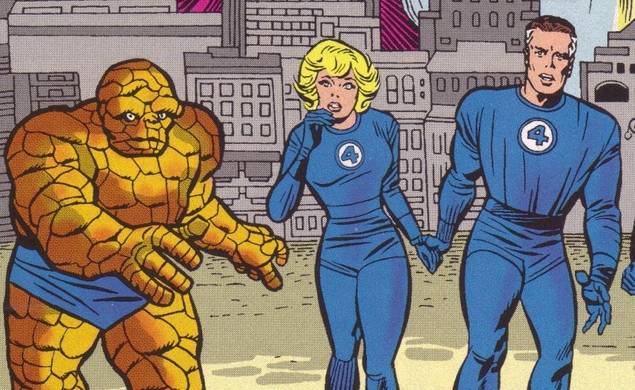 Quick: When you think of superhero movies today, what two words instantly come to mind? Did you guess “dark” and “gritty”? Ding ding ding! You’re right! Everyone wants their superhero feature to be dark and gritty and brooding and tortured, but that particular aesthetic and tone keeps the vast majority of the genre from embracing the inherent silliness of whole gobs of comic book tales. Sure, being a superhero is probably extremely hard—flying is incredibly taxing on the body, everyone always wants you to help them move—but why not have some fun with it?

Part of that possible fun? Kind of silly outfits. Nowadays, everyone is kitted out in high-tech fabrics and shiny shells that are barely reflective of the bright colors and stretchy spandex of days past. Superman’s entire color scheme was muted in Man Of Steel, Batman might as well be wearing a full-body Otter Box, and even Thor’s cape refuses to catch the breeze in a jaunty manner. The new Fantastic Four film certainly looked to be going in that direction, with lots of dark and binding outfits for its four superheroes-in-the-making, all spacesuits and big helmets and such.

But perhaps the film’s first trailer—which, quite notably, only showed us brief glimpses of suits that appear to come from the Superman factory (read: vaguely recognizable, but also very dark and very serious, perhaps even gritty)—was leading us astray, because star Miles Teller has now hinted that we might see original Fantastic Four costumes in the new film.

When asked about the group’s suits that appear in the trailer, the new Mr. Fantastic told ScreenCrush:

“These are the beta versions of the costumes, which is great [...] But, yeah it would be very odd if the Fantastic Four didn’t don the traditional costumes. You’ve got to. There is some servicing there. You’ve got to give that to the fans. That’s what it's all about.”

Be ready for that spandex, team.