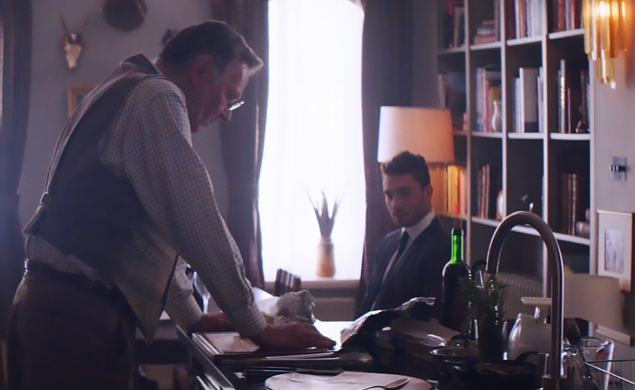 Popularly known as the bad boy of haute cuisine, Anthony Bourdain has criss-crossed the globe in search of the most mouth-watering, unusual delicacies that Earth has to offer. His TV programs No Reservations and Parts Unknown have gained a sizable following of their own, among folks equally invested in learning about new and challenging additions to their palette, and seeing a grown man choke down pig taint. But beyond introducing me to the best cheeseburger I’ve had in my entire life, Bourdain’s an accomplished writer, with a handful of nonfiction books about the art and culture of cooking, as well as a few works of fiction. He penned the speculative-history investigation Typhoid Mary: An Urban Historical, as well as the food-world mysteries Gone Bamboo and Bone In The Throat.

The latter of the two has been chopped up, reduced in red wine, and emulsified for the silver screen. Bone In The Throat fast approaches its world premiere at SXSW on Saturday, and a new trailer has now arrived to, if you’ll pardon the expression, whet our appetites. It sounds like a meaty story, too: Trading the novel’s Little Italy setting for East London, the film tells the story of an enterprising young cook who gets an eyeful when a man is murdered in his kitchen. It’s not long before his degenerate uncle is jumping him into the wild and woolly world of organized crime in East London. Has the meek gourmand bitten off more than he can chew? Between running a kitchen, keeping out of jail, and staying alive, has he got too much on his plate? How many food puns can I make before someone takes the microphone away from me? Will Bone In The Throat be a veritable feast for the sens—: