We Always Lie To Strangers captures the tacky, tinsel heart of Branson 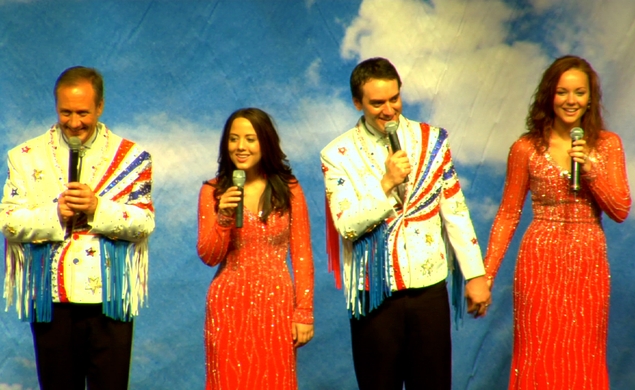 Branson, Missouri is where good taste, old people, and struggling careers go to die. The town’s star-spangled visual aesthetic suggests what might happen if an American flag and a Christmas tree factory were to explode simultaneously and litter the ephemera across the red-white-and-blue outfits of the town’s eternally smiling singers and dancers. In Branson, a faithful stage-show version of the Star Wars Holiday Special would be run out of town for being too classy (and quite possibly the work of Hollywood commie pinkos as well).

Branson is notorious as the hillbilly cousin of Nashville and Las Vegas, a G-rated pleasure palace where sex, sin, and booze are replaced by God and country. Yet, like most industries that employ large numbers of singers, dancers, and chorus people, a sizable percentage of Branson’s population is gay, including one of the subjects of the intriguing documentary about Branson, We Always Lie To Strangers. This representative of Branson’s large but not terribly out gay community is still waiting for the right time to tell his children.

Right wing, Christian, and conservative to the core, Branson is a city where Lawrence Welk is still revered and Yakov Smirnoff qualifies as a superstar. We Always Lie To Strangers, a documentary from A.J. Schnack (who previously made well-received documentaries about They Might Be Giants and Nirvana) and David Boone Wilson, follows a broad cross-section of the small town. (Though millions visit every year, only about 10,000 folks actually live there.) These include The Presleys, one of what appears to be countless cornball family acts, the female mayor, and a baggy-pants comedian who specializes in playing a sub-Hee Haw rube who, despite his exterior, is always able to put one over on some fancy-talking city slicker.

Released in 2013, We Always Lie To Strangers captures the town at a low ebb financially. The corn-fed crowds aren’t coming in droves the way they once did, which sends shivers of anxiety through the small army of entertainers who owe their livelihood to tourist money. The situation also accentuates the yawning gap in income and quality of life between the service workers who make the city run and the marquee entertainers who bring the blue-hairs to town with the promise of watching Tony Orlando in his natural habitat.

Amid all the kitsch, the filmmakers find isolated moments of beauty where the tackiness recedes and the town’s natural beauty comes to the fore. This is unmistakably the minor leagues, and there’s a deep strain of melancholy and shattered dreams as people who almost had the looks, almost had the voice, and almost had the talent try to eke out a living as a performers as they hit the wrong side of middle age in an unforgiving town and an especially unforgiving industry. A thoroughly engaging exploration of a place most Americans consider a national embarrassment, We Always Lie To Strangers admonishes rubberneckers and hipsters to come for the laughable kitsch and deplorable taste, and stay for the deep, pervasive sadness.