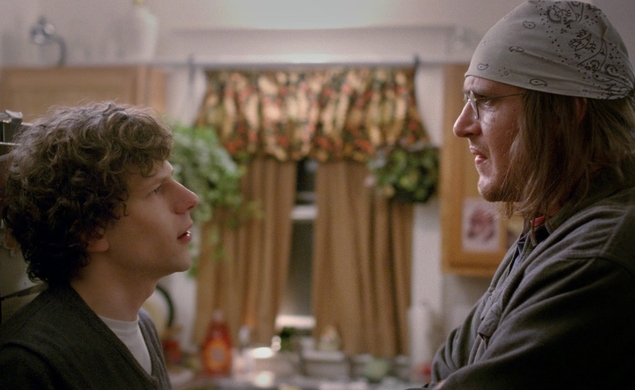 It often seems that any film that debuts at a film festival is then automatically known as “XX festival hit” or “blank blank festival darling” or even “put the name of your film here festival favorite,” leaving some of us to wonder, “wait, whose favorite?” or “that was a hit?” or “what’s a darling?” Yet, as the title up top indicates, James Ponsoldt’s The End Of The Tour was a bonafide Sundance favorite this year, a declaration not simply based on widely positive critical reactions, but also rooted in my own personal opinion. It was my favorite film of the festival, and this year was a mostly solid affair with plenty of pleasing offerings. Still, Ponsoldt’s latest grabbed my heart early on and never really let go.

Our own Noel Murray also saw the film at Sundance, writing of it: “With a bravely abrasive [Jesse] Eisenberg and a soulful, affable [Jason] Segel anchoring the film, The End Of The Tour is both a finely honed look at a brief, strange relationship and an engaging dialectical inquiry into what life, art, and celebrity are all about.” That’s the real appeal of the film, not that it’s a biographical look at beloved author David Foster Wallace, but that it’s that and also a smaller-scale look at a couple of dudes trying to navigate the bigger questions of relationships and ambition and work, and what makes those things good. Did I mention it made me cry—like a lot—and that I mostly only cry at DisneyNature films (shout out to Bears)? It made me cry. A lot.

And now it can make you cry, too!

/Film reports that A24 will release the film in a limited capacity this summer, with a run starting on July 31. Lest that summer date make you think that the film is not an Oscar contender, Thompson on Hollywood actually provides a slew of reasons why a summer date doesn’t automatically knock a film out of awards contention. Another reason why the film should qualify for Oscar buzz? It’s really good.

Although Wallace’s estate made it clear that they “neither endorse nor support” the film for a number of reasons, that doesn’t mean it’s a salacious or scathing feature. It’s mainly just kind of nice (and, again, also very good). Does Jason Segel give an Oscar-worthy performance? Well, let’s leave that for months—many months, please—from now, instead opting to appreciate the film when it arrives later this summer.