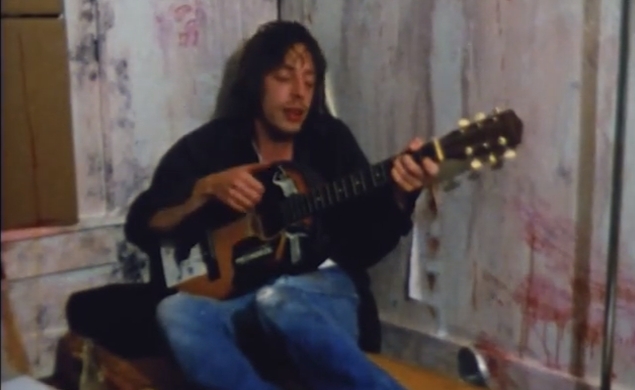 On Friday, Joel Potrykus’ Buzzard opens in limited release and on VOD. My review runs tomorrow, but I’ll offer this sneak preview now: It’s a smart, unnerving, hilarious black comedy, a kind of punk cross between Office Space and Taxi Driver. It also happens to be the third in Potrykus’ “Animals Trilogy,” following his 2010 short film “Coyote” and his acclaimed 2012 debut feature Ape. Potrykus and his lead actor/muse, Joshua Burge, hail from Grand Rapids, Michigan, and their work has the best qualities of outsider art, with a distinct DIY regionalism and a focus on the underclass. Potrykus also has an eagerness to mix and match genres and tones at will, which is what makes Buzzard so queasily effective. Comedy and psychosis are bundled together.

Courtesy of Oscilloscope Pictures, the little-seen “Coyote” is featured above. Shot in grimy Super 8mm, the 22-minute short stars Burge as a junkie who shoots heroin by day and transforms into a werewolf by night. There’s a metaphor here for something, I’m sure, but Potrykus’ odd lurch into the supernatural fits with the spontaneous spirit of the film, which also finds time for an impromptu, choreographed dance sequence around a boombox. (The eclectic, wall-to-wall soundtrack features everything from French pop songs to Minor Threat.) Though “Coyote” is certainly playful, the deadpan comedy that would emerge in Potrykus’ later work isn’t quite present yet. But the short does have some continuity with Buzzard, particularly in Burge’s performance as a poor, disheveled, restless young man who’s caught up in a self-destructive (and plain old destructive) routine. “Coyote” is the embryonic beginning of a promising creative partnership.