Our next movie of the week: Artists And Models 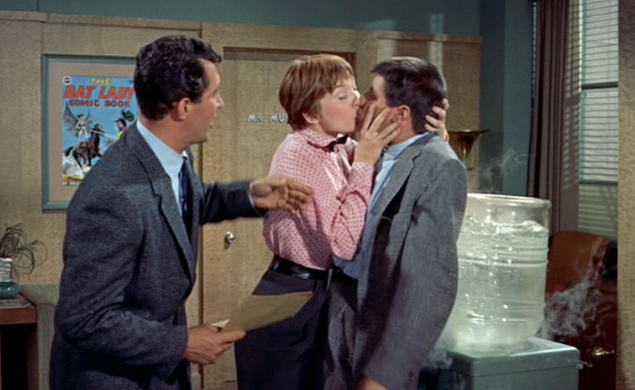 1955’s Artists And Models benefited from a singular confluence of events. Most notably, the film represented the first of what would be eight pairings between actor Jerry Lewis, a human cartoon of sorts, and former animator Frank Tashlin, who would direct Lewis and partner Dean Martin’s final collaboration, the terrific Hollywood satire Hollywood Or Bust, as well as six films Lewis made on his own. Artists And Models represented a perfect fusion of filmmaker, star, and subject. Tashlin and Lewis’ maiden collaboration revolves around the comic-book hysteria of the mid-1950s through the story of a pair of buddies: debonair but luckless painter Rick (Dean Martin) and his nerdy, comic-book obsessed roommate Eugene (Jerry Lewis), who is bedeviled by nightmares involving a superhero named Vincent The Vulture (a “Birdman,” if you will). It is a comic-book movie directed by a comic-book director and starring a sentient comic book.

Shirley MacLaine was never more adorable than in this early role as the model for a comic-book character Eugene is obsessed with named Bat Lady, while Dorothy Malone rounds out the cast as Rick’s love interest and the creator of Bat Lady. Artists And Models is an utter delight, a live-action cartoon that combines inspired physical gags drawing on Tashlin’s background as an animator, cartoonist, and children’s book author with a genuinely satirical take on the lurid excesses of 1950s pop culture and the sleazy opportunists out to exploit the public’s enduring immaturity and prurient interests.

Tashlin’s ebullient comedy is at once a tribute to and a satire of the sum of the comic-book world: the people who make them, the people who exploit them, the people who consume them, and a general public that can be counted upon to consistently misunderstand them. So join us for my Keynote essay on the film’s combination of satire and comic-book shenanigans and a Forum on Tuesday, and a secondary essay by Noel Murray on Tashlin’s animated shorts on Thursday.