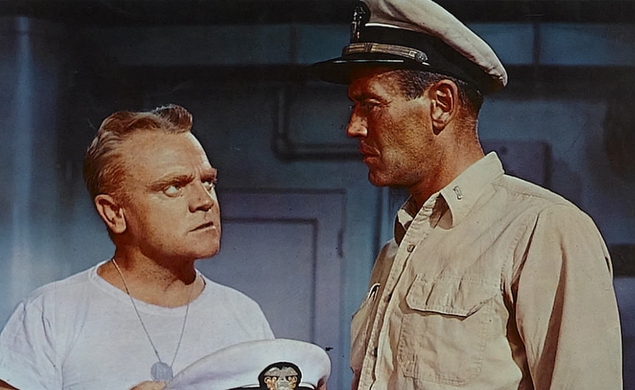 I’ve often said that prison movies aren’t really about criminals; they’re about the common feeling of being stuck somewhere, wishing for escape. The same could be said of a lot of war movies: They’re less about heroism or atrocity but about having a crummy job. That’s certainly the case with Mister Roberts, the 1955 big-screen adaptation of Thomas Heggen’s novel and play of the same name. Henry Fonda reprises his stage role as the title character, an officer serving on a naval supply ship during WWII, and pining to be transferred to a combat post. William Powell plays the laid-back doctor who’s Mister Roberts’ confidant, while Jack Lemmon is a boastful-but-meek ensign, and James Cagney is the dictatorial commanding officer the crew conspires to defy. John Ford, Melvyn LeRoy, and Joshua Logan took turns trying to wrangle this material into a movie, but Mister Roberts ultimately succeeds because of its story, which taps into the all-too-familiar experience of being ground down, day in and day out, by petty bullshit.  Mister Roberts airs on Turner Classic Movies tonight at 5:45 p.m. Eastern.