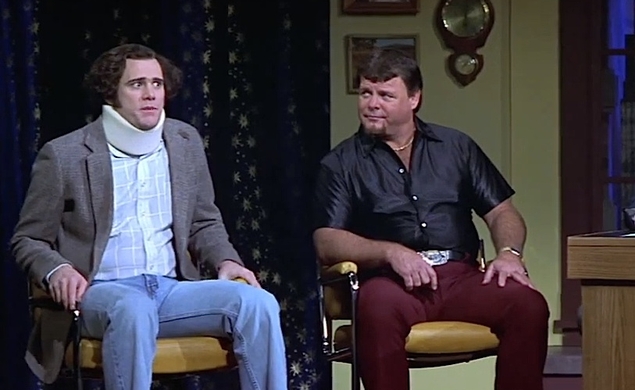 It’s no secret that Jim Carrey got very into character on the set of the Andy Kaufman biopic Man On The Moon—so into character, as the story goes, that he refused to answer to his own name. Everyone, from the lowliest production assistant all the way up to director Milos Forman, had to address him as “Andy.”

But it went even deeper and weirder than that. On the new episode of “Stone Cold” Steve Austin’s podcast, Jerry “The King” Lawler talks about working with Carrey on Man On The Moon. Lawler was famous for his feud with the real Andy Kaufman, which gained national notoriety after a joint interview on Late Night With David Letterman that ended with Lawler slapping Kaufman and Kaufman throwing coffee in Lawler’s face. When Forman and Carrey turned Kaufman’s life into a movie, they brought in Lawler to play himself.

Carrey was apparently so dead-set on experiencing everything that Kaufman experienced that he demanded to receive the same piledriver from Lawler that put the real Andy in the hospital for three days (he was faking a neck injury). The insurance company refused, so Carrey tried to secretly convince Lawler to do it anyway on the last take of the shoot. Instead, Lawler got word to Forman, who immediately wrapped before the last take and denied Carrey his chance at wrestling glory. That, according to Lawler, is when Carrey lost it:

“I looked over and Jim Carrey was freakin’ furious. His eyes got as big as saucers, and he’s looking at me, and he storms out to the middle of the ring and he grabs the microphone and he starts feeding the house. And he says ‘Let me tell you people something! I wanted to take a piledriver! But the insurance people were afraid and they wouldn’t let me do it! I’m not afraid!’ And all of a sudden they cut the microphone off. Suddenly, he couldn’t be heard. And he was really even more furious now, right? So he starts screaming. ‘I’ve worked on Broadway and I do not need a microphone to be heard! I am not afraid to take the piledriver! Lawler’s just afraid to give it to me!’

Lawler went after Carrey, which gave him the “real” moment he desperately craved. For a while Lawler was told he was fired from the movie, but eventually cooler heads prevailed. When they re-created the famous Letterman interview for Man On The Moon, and the time came for Lawler to smack “Andy,” he didn’t hold back. The slap in the movie, Lawler says, is totally legit:

It’s possible Lawler and Carrey are working us over here the same way Lawler and Andy worked over the Letterman crowd. But at this point that seems unlikely. If you’re curious, here’s the original Letterman clip of Lawler and Kaufman:

Andy Kaufman fans should definitely check out the rest of the podcast, as Lawler details all of the planning (or, in some cases, complete improvisation) that went into their feud, including the Letterman appearance. And don’t worry; Lawler and Carrey smoothed things over in the end. Carrey even sent Lawler a gift recently as a token of his appreciation: a box of vintage records of songs performed by pro wrestlers.