Our Next Movie Of The Week: 25th Hour 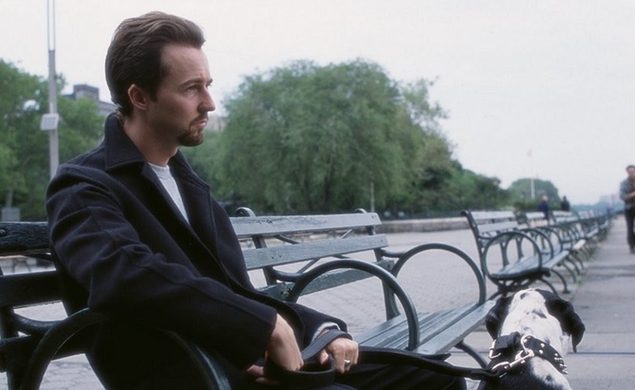 Though Spike Lee’s 25th Hour was in preproduction when the towers fell on September 11, Lee decided to make the aftermath part of the fabric of the film, just as other filmmakers were busy scrubbing it away. The boldness of that decision is typical of Lee yet astonishing nonetheless, because it threatened to overwhelm a much smaller story about the sins and regrets of a man facing seven years upriver. But Lee is a New York director through and through, and documenting the evolving reality of that backdrop is as important to his work as San Fernando Valley is to Paul Thomas Anderson or as suburbia is to Steven Spielberg. The remnants of 9/11 in 25th Hour are not overwhelming—the “Tribute In Light,” an overhead of Ground Zero, a tabloid cover on the hunt for Bin Laden, etc.—but they profoundly complement and affect the tone and themes of the film.

Based on David Benioff’s book, 25th Hour stars Edward Norton as Monty, a convicted drug dealer who’s one night away from beginning his prison sentence. Who ratted him out is an open question, but much of the suspicion falls on his girlfriend Naturelle (Rosario Dawson), one of the few people who knew where his drugs were stashed. Nevertheless, Monty wants to spend one final night of debauchery with his oldest friends: Jacob (Philip Seymour Hoffman), an ineffectual private-school teacher who’s dealing with the advances of a 17-year-old student (Anna Paquin), and Frank (Barry Pepper), a hotshot Wall Street broker who harbors hidden resentments. Whether or not Naturelle is guilty of betraying him motivates some of the drama, but much more of it concerns choices and their consequences, the bonds and limits of friendship, temptation, and the roads not taken.

Our Movie Of The Week coverage of 25th Hour kicks off on Tuesday with my Keynote on sin, regret, and 9/11, and a Forum with Tasha Robinson and Mike D’Angelo. Then Keith Phipps will follow up on Thursday with a brief history of the World Trade Center on film. Until then, here’s the opening title sequence with the “Tribute In Light,” which highlights Terence Blanchard’s powerful score: