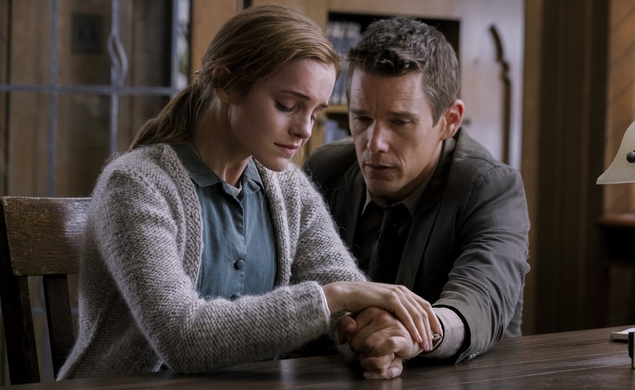 Plenty of trailers these days tend to give too much away, often serving up spoilers and twists wholesale, robbing the finished feature of the kind of shock and awe that can serve stories and serve them well. In my day, you might think, trailers didn’t tell us nothing and we liked it! Ah, the good old days. This Regression trailer just might speak to you, then, because I have zero idea what’s going on here. Having read the official synopsis for the film, I can’t say that much of that particular narrative appears in this new look at the Ethan Hawke- and Emma Watson-starring thriller. I say that with admiration.

“Minnesota, 1990. Detective Bruce Kenner (Ethan Hawke) investigates the case of young Angela (Emma Watson), who accuses her father, John Gray (David Dencik), of an unspeakable crime. When John unexpectedly and without recollection admits guilt, renowned psychologist Dr. Raines (David Thewlis) is brought in to help him relive his memories and what they discover unmasks a horrifying nationwide mystery.”

You say “horrifying nationwide mystery,” I say “one ticket, please.”

An early version of this trailer—in Spanish!—just made the cut-off for yesterday’s Newsies, so this might look somewhat familiar to some of you. Much like our own Rachel Handler, I also took French instead of Spanish, so the entire thing mostly consisted of scary visuals and occasional words I recognized. Fortunately for all our other semi-Francophones out there, we’ve now got an English-language trailer to consume (and hey, this one features Spanish subtitles, so we can all finally be on the same page with this one). Oh, yes, definitely scary visuals and occasional words I recognize!

Let’s all regress together—in any language—with the new trailer below:

This trailer still manages to pack a lot into just a slim minute. First of all—and this may be nothing!—why is the film set in 1990? Or, more precisely, why is that the first thing we learn about the film in this trailer? Films can obviously be set whenever, but that it’s a detail that’s called out in the first trailer’s first line makes it feel oddly important.

Attached talent like Ethan Hawke (who continues to make interesting genre decisions), Emma Watson, and David Thewlis is also compelling, and all three are front and center here.

Oh, and the people in robes. They’re great, too.