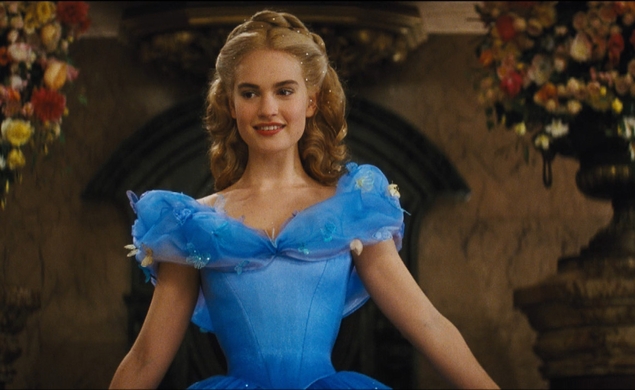 Newsies Special Sidebar: Other Trailers Of The Day
Today, a lot of trailers came out at once. This makes a (hypothetical) news editor’s life difficult—can one run a newsreel populated solely by trailers? No, one cannot. But one can have a Newsies Special Sidebar populated solely by trailers. So without further ado, here are the Other Trailers Of The Day:

The Cinderella trailer (out March 13)

In this trailer, Kenneth Branagh’s version of Cinderella (Lily James) gets into an argument about the ethics of hunting with Prince Charming (Richard Madden), does a lot of laundry, and wears some very fashionable headscarves that are, presumably, meant to make her look impoverished, but accidentally just look fabulous. She also rocks some very cool hair-gem-things that I haven’t seen since the late ’90s.

The A Perfect Day trailer (out April 28)

Fernando León de Aranoa’s A Perfect Day follows Benicio Del Toro and Tim Robbins, two jaunty aid workers trying to excavate a body from a local well, flouting orders from the United Nations, and flirting with attractive women in the process. That does sound like a perfect day!

The Regression trailer (out Aug. 28)

This trailer is in Spanish. My parents made me take French for reasons that are still unclear to me. But I’ve read elsewhere, in English, that the movie follows Emma Watson as a woman who accuses her father of an “unspeakable crime” and Ethan Hawke as the man investigating the case.

Riskiest Movie Option Of The Day: The Terrible Two
Universal has optioned the recently released kids’ book The Terrible Two, by Mac Barnett and Jory John. The book centers on a “middle-school kid named Miles Murphy, who is the best prankster the school has ever seen.” Whoa. SHOTS FIRED, Y’ALL. Who wants to take Miles to task? “When he’s forced [by his parents and/or a fascist regime] to move to the sleepy town of Yawnee Valley, he expects to become the best prankster at his new school as well, but discovers he’s got some stiff competition.” Let’s hope Universal doesn’t mess up this risky source material. Pranks are no joke. I mean, they are literally a joke, but must be taken very, very, seriously. I say this as an adult woman whose friends won’t answer her phone calls or text messages on April 1.

Better Prankster Than Miles Murphy Of The Day: France
In a hilarious prank that rivals those from the fertile mind of cartoon-child Miles Murphy, France has deemed that Fifty Shades Of Grey is appropriate for children 12 and up. French classification board President Jean-Francois Mary said the movie “isn’t a film that…can shock a lot of people.” He also calls it “schmaltzy.” (Honestly, France seems great, you guys.) I haven’t seen the movie, and I’m certain he’s correct on both counts. But as someone with a 12-year-old sister, I’m also certain that her mind would be blown if she tried to wrap it around the concept of consensual sadomasochism. I am also quite certain that France is just trolling the shit out of all of us at this point. In which case: Good one, France!

Travoltaissance Of The Day: John Travolta in I Am Wrath
Is it time for a Travoltaissance? Probably not, but I’m open to it. John Travolta is in talks to star in I Am Wrath, an action-thriller that will see him playing “a man out for vigilante justice after a group of corrupt cops are unable to catch his wife’s killer." It’s based on a story by Yvan Gauthier, and, as The Wrap puts it, could be Travolta’s Taken. There’s something uncanny happening with Travolta’s goatee in the photo that accompanies The Wrap’s piece and I can’t think about anything else right now.

Darkest Pretend Plot Summary Of The Day: Alvin And The Chipmunks: The Road Chip
Tony Hale has joined the cast of Alvin And The Chipmunks: The Road Chip, alongside Jason Lee, Justin Long, Matthew Gray Gubler, and Jesse McCartney. Walt Becker will direct the movie, which will be a mix of live-action and animation. Its plot details are currently unknown, except to the Newsies: The Road Chip will follow Alvin as he wakes up from surgery after a violent car accident that almost claimed his life. He’s happy to be alive, but he no longer wants to be a part of the Chipmunks, deciding to do something more meaningful with his life: become a criminal investigator. During training, he stumbles across his own case file, and realizes that the car accident wasn’t an accident at all—in fact, it was a set-up, designed to get him into the hospital so he could be implanted with a microchip that will alert a group of violent communist rebels to his every move. Turns out Alvin isn’t an accident, either—he was designed and created by the USSR to convince kids to love chipmunks, the traditional communist symbol. For years, it worked—children all over the world watched Alvin and his brethren in innumerable awful movies while subliminally absorbing the films’ subtle communist agenda. At the end of the movie, Alvin realizes he’s spent his entire life being secretly filmed for radical propaganda masquerading as children’s fare, and he takes his own life.