“What’s your dream? Owning whores?” An exclusive clip from Showgirls 2: Penny’s From Heaven 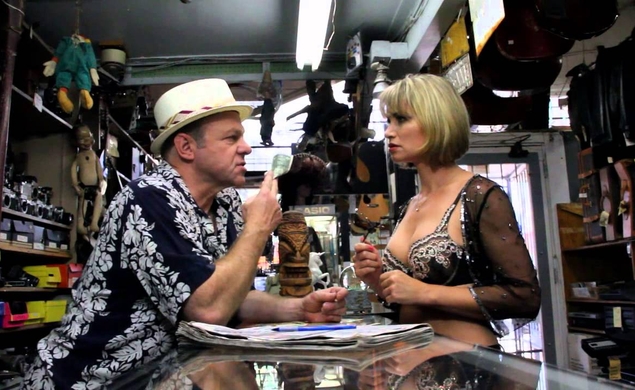 Yes, they made a sequel to Showgirls. Yes, the Paul Verhoeven movie starring Elizabeth Berkley as a stripper dancer who dreams of becoming a star in Las Vegas and occasionally has sex so violent and thrashy you’d swear she was in the throes of some kind of epileptic seizure. No, Berkley isn’t in it. But Rena Riffel, who played Penny in the original film, is, and she’s recruited other Showgirls veterans like Glenn Plummer, Dewey Weber, and Greg Travis to appear in the movie with her, which she also wrote and directed (and edited and produced) with Verhoeven’s blessing. Ingeniously named after her character, Showgirls 2: Penny’s From Heaven is now available on DVD and VOD, and we have the heavenly fortune to bring you this exclusive clip.

Penny’s From Heaven has gotten positive reviews from critics who found it to be a suitably kooky sequel to Verhoeven’s original. Alonso Duralde of Movies.com called it a “lunatic extravaganza” that’s “exactly what you want” from a movie called Showgirls 2: Penny’s From Heaven, and Rich Juzwiak from Gawker said it was “funny, stupid, and aware that it’s both,” and compared the movie favorably to Russ Meyer’s Beyond The Valley Of The Dolls. I haven’t seen Showgirls 2 yet myself, but lines like “What’s your dream? Owning whores?” make me want to really soon. Because I, like so many of us, have dreamed of whores, so this is a very relatable film for me.