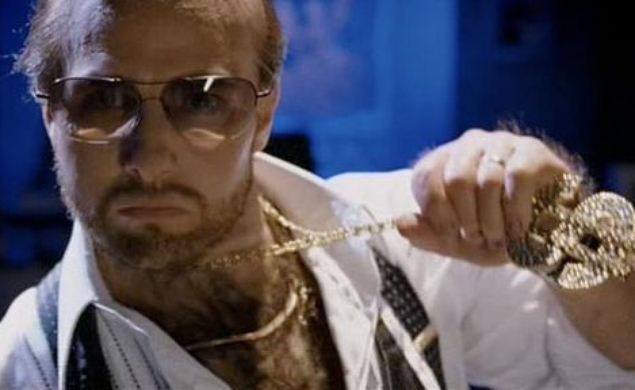 Few actors are as obsessed with their images as Tom Cruise. And, ironically or not, few actors have worse public images than Cruise. So every time Cruise plays a role that deviates from his well-worn public persona—a grinning, handsome, dynamic hotshot who’s the best at what he does, but can use a little mentoring—it’s considered news. For example, when Cruise donned a wheelchair to play anti-war activist Ron Kovic for Oliver Stone in the tedious anti-war movie Born On The Fourth Of July, it made news and netted Cruise an Academy Award nomination for playing a disabled man. Hell, when Cruise had gray hair and played a hitman in Collateral, it was considered a daring change of pace. And people lost their minds when Cruise donned a bald cap, a fat suit, gold chains, and giant clumps of man-fur as sleazy Hollywood executive Les Grossman in Tropic Thunder. And when Cruise puzzlingly decided to play a one-handed German officer who, for some inexplicable reason, does not talk in anything that can even reasonably be called a German accent in Valkyrie, analysts predicted doom, but the film was a big old hit anyway.

Cruise actually plays against type fairly often, largely because any time he plays anything other than a toothy, grinning, Mr. Handsome World’s Best-type, it’s considered a bold deviation from the norm. But Cruise has seldom broke the mold as dramatically as he will to play 280-pound pilot and drug-runner Adler B. Seal for Edge Of Tomorrow director Doug Liman in the ripped-from-yesterday’s-headlines drug-world drama Mena.

It is not yet known whether Cruise will gain a great deal of Oscar-friendly weight to play a drug runner nicknamed “Fat Man” who, according to an article in the Guardian, smuggled pot, cocaine, and Qualudes into the U.S. from South America from 1976 to 1984. At that point, he got caught, and agreed to work for the government to avoid prosecution. The real-life drug smuggler has already been portrayed by Dennis Hopper as a normal-sized man in the 1991 HBO movie Double Crossed.

The role has all the makings of an Oscar nomination—possible massive weight gain, real-life character, dark subject matter—but before he tackles the role of Fat Man, Cruise will first play Mr. Perfect, a.k.a. Ethan Hunt, in a fifth installment of the Mission Impossible series. Because branching out is well and good, but you gotta pay the bills, and those Scientology castles in the sky aren’t cheap.