The Iron Giant is back, in Mondo form 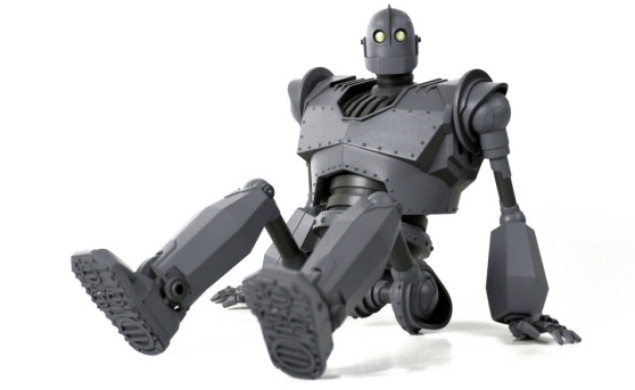 Before he became one of the biggest and most respected filmmakers in Hollywood thanks to movies like The Incredibles, Ratatouille, and Mission Impossible:Ghost Protocol, super-genius Brad Bird made the transition from television (where he worked on shows like The Simpsons and The Critic) with 1999’s The Iron Giant. Adapted from Ted Hughes’ children’s book, the film was a massive critical success but a box-office bomb. Over the years, though, the film has attracted a sizable and fiercely loyal cult, drawn to its bittersweet tone and the unforgettable title character, a metallic alien voiced by Vin Diesel, who proved, pre-Guardians Of The Galaxy, that he could make audiences cry by voicing an inhuman object.

The Iron Giant has attracted such a massive cult following that, 16 years after its release, geek powerhouse Mondo is releasing an insanely elaborate Iron Giant figure for adults whose intense nostalgia is only matched by their incredible wealth. Yes, the Mondo Iron Giant figure is incredibly cool and features all manner of points of articulation (over 30!), interchangable arms and heads, and other accessories, but it’s also mind-blowingly expensive. If you want one of these bad boys for your good boy or girl (or, who are we kidding, yourself, as adults are probably the products’ biggest market) it will set you back a cool $300, plus shipping and handling. That’s right: This figure costs three hundred dollars. Is it worth it? We can’t tell as of press time, but Mondo could certainly help us in our journalistic judgment by sending a whole bunch of these figures to The Dissolve office so we can see for ourselves if they’re worth $300, or are only worth a piddling $250-$275.

Those unwilling or unable to shell out the big bucks for the big guy himself may want to check out Mondo’s accompanying bolt replica, which sells for a mere $65; while it doesn’t have any points of articulation, it does light up, so that’s cool too, we guess.