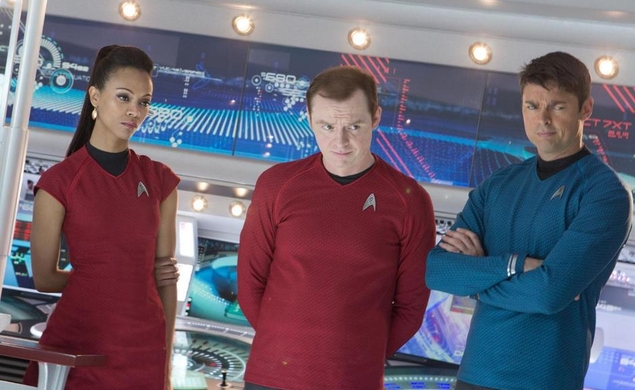 Simon Pegg seems like the kind of guy who would know a thing or two about Star Trek. After all, he has starred in two Star Trek movies (more than plenty of other people), and the multi-hyphenate has always exhibited a steadfast love for the beloved property. He wears the Starfleet uniform well. He does a nifty Scottish accent. He apparently knows how to operate a transporter.

Oh, and he’s also Simon Pegg, one of Hollywood’s most geek-friendly actor/writer/producers. You know Simon Pegg! Simon Pegg! So the news that the Shaun Of The Dead/Hot Fuzz/World’s End star (and, yes, also the modern answer to Star Trek’s Scotty) is looking to get his hands dirty with yet another element of the Star Trek universe is a good thing. Beef up those multi-hyphenate credentials and all.

Deadline reports that Pegg and Doug Jung, the creator of TNT’s series Dark Blue, will co-write the script for Star Trek 3, which recently went through a bit of a director switcheroo, with original director Roberto Orci exiting, only to leave room for Justin Lin. This is great news! A film with writers!

But, wait, what about the news from way back in December of 2013 that Orci and his sometime-partner Alex Kurtzman would be co-writing the script alongside newbies J.D. Payne and Patrick McKay? Apparently, when Orci left the project as director, all the work that came before—including his script with Kurtzman, Payne, and McKay—left too. That sounds slightly less great.

As of now, Star Trek 3 does have a few things in its favor, including a cast (returning stars!), its own sense of mythology (parallel universes!), and a planned release date (July 8, 2016). Surely someone can beam up a script out of that.