The trailer for Anarchy, Michael Almereyda’s adaptation of Cymbeline, looks a lot like Sons Of Anarchy 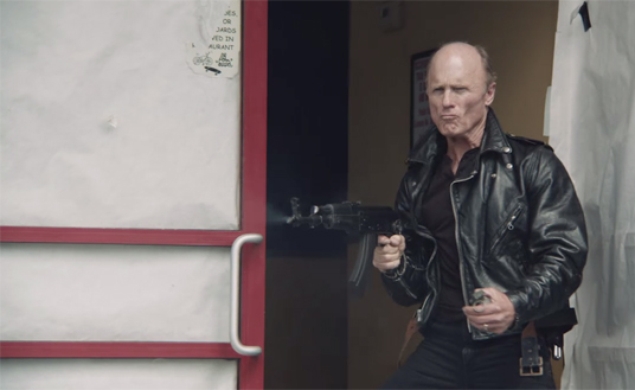 How do you convey that a Shakespeare adaptation is a badass tale of bikers warring with corrupt cops and not a tale of men in tights prancing about as they deliver soliloquies? Well, for starters, change the name of said Shakespeare adaptation from the wimpy-sounding Cymbeline, which sounds a lot like Thumbelina, to the considerably more macho Anarchy. How badass is Anarchy? Well, it’s both the subtitle for the sequel to The Purge, where people can commit any crimes they want over a 24-hour period without any legal consequences, and one-third of the title of Sons Of Anarchy, another badass tales of a biker gang being all badass and non-tights-wearing and shit.

The trailer for Anarchy looks like it lives up to its title with a swaggering, gritty tone, a leather jacket wearing a leather jacket, and all sorts of tough-guy antics paired with the Bard’s high-falutin’ dialogue. Yes, Anarchy seems like the perfect way to trick your child into seeing a Shakespeare adaptation by making it seem like a latter-day version of one of Roger Corman’s bikersploitation cheapies.

Anyone who has seen Almereyda’s 2000 adaptation of Hamlet starring Ethan Hawke and famously featuring the “To be or not to be” monologue in a Blockbuster video store, or his earlier vampire movie Nadja, knows he has an offbeat sensibility and a take on the Bard that is both reverent (it looks like he’s sticking to the original text here, as he did in Hamlet) and audacious in its visuals and attitude. So while Anarchy may be good or it may be bad, it looks like it will at least be interesting.