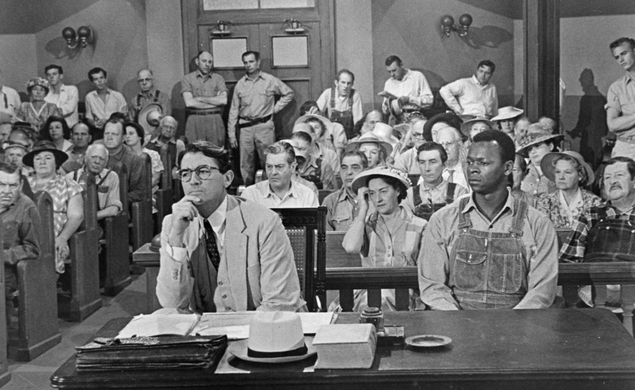 Harper Lee’s Pulitzer Prize-winning 1960 novel To Kill A Mockingbird is a coming-of-age piece, a Southern slice-of-life, and a finely crafted legal thriller; and the 1962 film version follows suit, working as both a popular entertainment and a prestige picture. Producer Alan J. Pakula, screenwriter Horton Foote, and director Robert Mulligan take a few liberties with Lee’s book, but stay faithful to what matters. The movie establishes a bucolic setting, introducing scholarly widowed lawyer Atticus Finch (played by Gregory Peck) and his two kids, Jem and Scout, who are disappointed in their dad’s unwillingness to conform to small-town Alabama’s idea of macho. Then Atticus takes on the case of a kindly black laborer accused of assaulting a white woman, and everything changes. By telling the story through the perspective of the kids, To Kill A Mockingbird brings home the absurdity of segregation, as Jem and Scout come to understand what’s special and terrible about where they’re from. Like Lee’s novel, the film works so well because it’s tied to these characters, avoiding grand statements by dwelling on the specificity of Lee’s memories and experiences. To Kill A Mockingbird airs on Turner Classic Movies on Sunday night at 8 p.m. Eastern.