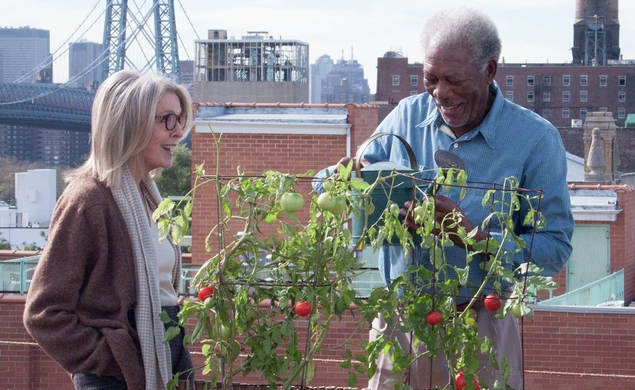 Not too long ago, universally beloved actors Morgan Freeman and Diane Keaton signed on to co-star in a good-natured comedy about a mature married couple who contemplate selling their gorgeous Brooklyn home, only to gradually realize what a brain-deadening clusterfuck it is to move in New York. Executives didn’t love Heroic Measures, the title of the novel from which the film was adapted, and decided to go in a different direction. They selected a title that would communicate the world-savviness and wide-scope ambition of the film, landing on Life Itself. That didn’t quite work out, and the project was hastily retitled Ruth & Alex, after its two leads.

We may not be privy to the goings-on behind the scenes at Latitude Productions, but some focus group must’ve raised a red flag, because the film has undergone another retitling. It will henceforth be called 5 Flights Up, in more direct reference to the contested location that drives the story. Beyond that, Deadline reports that the film has also locked down a limited-release date of May 8, presumably with a wide-release date to be announced at some point in the future.

But U.S. distributor Focus World may not be in a rush to get this film in front of audiences. It screened for press at TIFF back in September to a decidedly lukewarm reception. In a review of the film for Variety, critic Andrew Barker referred to it as a “conflict-free virgin cocktail of a movie.” Like so many films geared toward an older viewership, 5 Flights Up runs the risk of softening all of its edges until it more closely resembles a pile of mush.