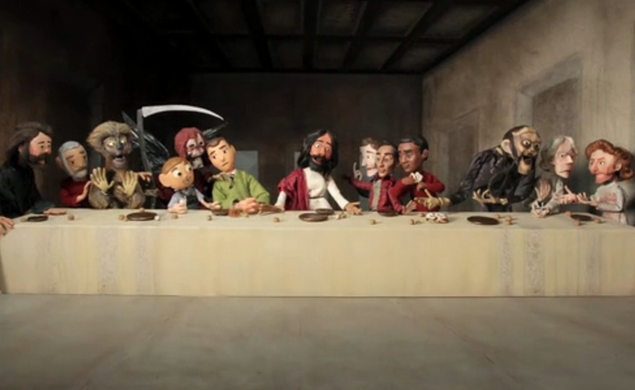 Way back in August of 2012, filmmaker Charlie Kaufman turned to Kickstarter to fund his ambitious Anomalisa. For his very first animated feature, Kaufman requested a relatively paltry $200,000 to help craft the stop-motion effort, billed as “a film is about a man crippled by the mundanity of his life." Kaufman previously performed the story as a play back in 2005, and it's clearly a story that is very dear to his heart (and, also, puppets).

Kaufman’s campaign ultimately racked up nearly double its initial financial request, and Kaufman and his team (including executive producers Dan Harmon and Dino Stamatopoulos) have quite generously rewarded his backers and fans with lots of cool prizes (from original artwork to actual stop-motion puppets to premiere tickets) and consistent updates over on their very active Kickstarter page. It’s no surprise then that Kaufman and the rest of the Anomalisa team turned to said page to announce that Anomalisa is now complete.

In July, Kaufman revealed that Anomalisa was nearly done and, in a genuinely fun and surprising twist, the finished project—once billed as a short film—would run a full eighty minutes.

There’s no word on when, where, or how the film will premiere—given those premiere ticket rewards, it seems clear that Kaufman intends to do this one up right—but considering the project’s track record for sharing the information and the love on its Kickstarter page, we suspect that will be the best place to frequent in order to find out the latest and greatest about the charming-sounding project.

Although a trailer is not available yet, the Anomalisa team previously offered up a behind-the-scenes video that shared a little bit about the stop-motion process and what we can expect from the final film. Take a peek: