Tiny Times spawns debate in China about movies and materialism 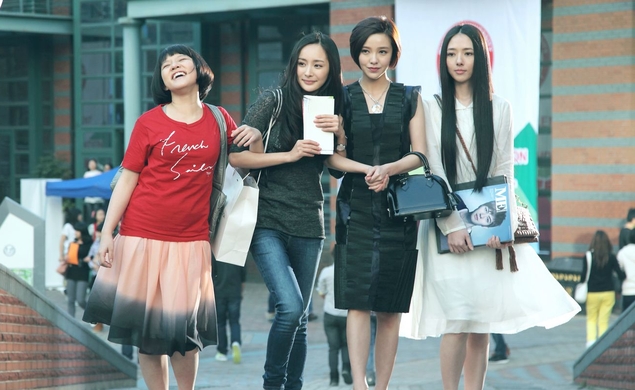 Tiny Times isn’t the highest-grossing Chinese film of the year, but it’s arguably the most discussed. The film and its sequel Tiny Times 2 (shot back-to-back) were both directed by Guo Jingming, who adapted his own novels. The three books (so far) are described by brandchannel’s Abe Sauer as “one part Sex And The City in the way they celebrate the bright lights, big city life of Shanghai; one part The Devil Wears Prada in their plot; and one part Gossip Girl in their convoluted soap opera dramatics.”

The youth-oriented films were made in a new way for the Chinese film industry, as producer Zhang Zhao told Variety’s Patrick Frater this week. Zhao—who’s also the films’ distributor through his company Le Vision Films—said decisions ranging from the casting process all the way up to when to release the sequel were shaped by scanning the opinions of 100-million plus users on Weibo (China’s Twitter). The goal was to bring out an audience unused to going to the movie theaters. “There has never before been a commercial film for youth,” Zhang said. “These are the kids that normally watch all their films on the Internet. We knew they were there.”

Such a data-oriented approach is part of a major shift in Chinese filmmaking, addressing audiences whose average age has quickly fallen: 25.7 years in 2009, 21.7 years in 2013. As Variety also reported this year, the science of test screenings has developed quickly. Peter Chan Ho-sun—director of American Dreams In China, the fifth-highest grossing Chinese film of the year—had half a dozen test-screenings and re-edited his movie to take feedback into account. “Now all of this year’s films are edited so precisely, they look like they have been edited by a studio,” he told Frater. “There’s nothing auteur about them.”

Guo is unapologetic about his books’ and movies’ rampant materialism, which has made the popular films targets for a lot of scolding. The films have their defenders: Global Times editor Hu Xijin said Guo was a “superman,” while critic Teng Jimeng said the film was a “feminist work.” More typical, though, are the reactions that were rounded up by the Jing Daily when the first movie came out: “vulgar,” “shallow,” “hyper-materialist,” a portrait of “unconditional indolence.” (You can read more excerpts from translated domestic reactions here.)

The paper also picked apart some of the implausibilities, notably that “the main character’s boss and editor of a major Vogue-esque magazine is inexplicably a straight male surrounded by submissive female assistants, when in reality, all the top fashion editors in China are very powerful women.” Writers Ying Zhu and Frances Hisgen took their critique further. “The four characters’ professional aspirations amount to serving men with competence,” they fumed. “The only enduring relationship in Tiny Times is the chicks’ relationship with material goods.”

It’s the unapologetic materialism that really rankles critics: One of the characters goes so far as to say that “love without materialism is just a pile of sand.” “The film champions luxury consumerism, casting one of its second-generation rich female protagonists not just as the story’s ultimate hero but also framing her anti-consumerism, also-rich boyfriend as a naive dolt,” Sauer observes. “One girls-night-out sequence ends with a character hoisting red Valentino bags for everyone in celebration of their friendship. Everyone squeals with delight.”

The sequel reportedly goes even further, as the Jing Daily’s George Ding harshly observed: “If Tiny Times 1.0 is HIV, then Tiny Times 2.0 is AIDS—more developed but not necessarily better.” He also listed the Shanghai setting’s many omissions: “There’s no mention of the smog (though it’s featured unwittingly in several scenes), skyrocketing real-estate prices, economic inequality or dead pigs in the Huangpu River.” (12,000 were found earlier this year.) As Chinese director Chen Shi-Zheng told The New York Times, if the movies are “like a product-placement commercial,” their creator is the real product: “Guo Jingming is a brand for Chinese youth.”

Controversy or no, Tiny Times 3 will be out next year. Here’s the trailer for the first film: