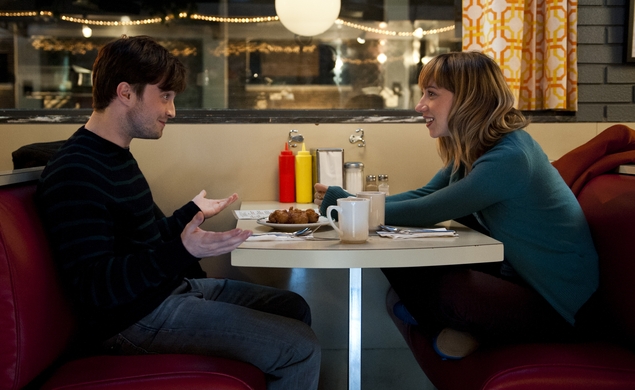 So the Oscar race is apparently already over and the local police are fielding calls on their emergency line about cell phone use in movie theaters, but beyond the hype and the hysteria, the Toronto International Film Festival is still about the films, and particularly the acquiring of said films for theatrical release. With the fest well under way, there are a few deals to pass along.

The latest: CBS is in “final talks,” per Deadline, to acquire the romantic comedy The F Word, starring Daniel Radcliffe and Zoe Kazan as a “star-crossed couple” who “meet at a party and feel chemistry” but decide to become friends instead. Our own Scott Tobias called the film “the rare rom-com that’s both funny and romantic,” though he also cautioned that “it does nothing whatsoever to buck the conventions of the countless movies like it.” Deadline’s Mike Fleming says the deal could be worth between $2 and $3 million.

Deadline also reports that A24, the upstart distributor of recent high-quality indies like The Bling Ring, The Spectacular Now, and Spring Breakers, are closing in on the rights for the Jonathan Glazer thriller Under The Skin, starring Scarlett Johansson “as an alien who preys on hitchhikers, who gets a one-way ticket to her planet.” We haven’t got his full report yet, but The Dissolve’s Noel Murray already called the film “unnerving” and “extraordinary” on Twitter, and compared it to “Species by way of Morvern Callar.” Sounds good to me; Deadline pegs the deal at roughly $1 million.

Fans of the musical drama Once will be happy to know that the film’s director, John Carney, had a new musical drama at Toronto, and that The Weinstein Company has already scored the distribution rights. Can A Song Save Your Life? stars Keira Knightley and Mark Ruffalo; Noel Murray says the film is “more forced than Once, but who cares?” while answering the title query in the affirmative (SPOILER ALERT) and calling himself a “total sucker” for Carney’s work. The Hollywood Reporter says TWC is considering an end-of-year release to try to get it into the awards race, particularly for Ruffalo as a Best Supporting Actor, but that they’ll likely hold it until 2014.

Finally, Variety has word that John Turturro’s Fading Gigolo will fade into theaters courtesy the folks at Millenium Entertainment, in a deal they report in the “about $3 million” range. The comedy stars Turturro as said gigolo; Woody Allen, in a rare performance outside his own movies, plays his pimp. Best I can tell, no one from The Dissolve has seen this one yet; the first two reviews for the movie on Rotten Tomatoes are positive. Make of that what you will.