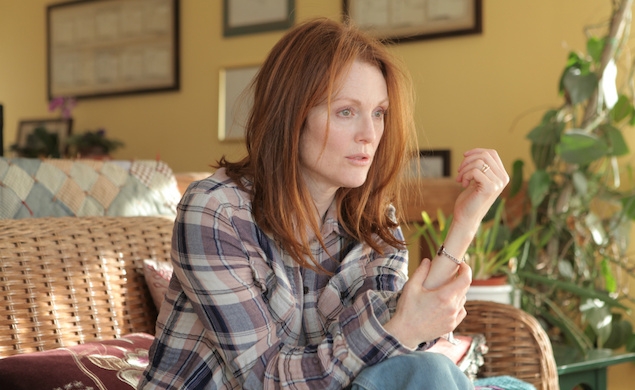 Julianne Moore won the Best Actress prize at Cannes for her performance as an unraveling diva in Maps To The Stars in May, but her turn in heartrending Alzheimer’s drama Still Alice has generated far more awards talk Stateside.

The film has already entered a limited release in America. (Our own Scott Tobias has the review to prove it. Choice quote: “In Still Alice, a celebrated Columbia linguistics professor gets diagnosed with an aggressive form of Alzheimer’s, makes a valiant attempt to hold onto her memory and her dignity, then stands by helplessly as the disease dismantles her life. That’s it. That’s the movie.”). But those dwelling outside Los Angeles and New York will get the chance to see Moore’s slow-motion disintegration next month. She’s one of the most reliably brilliant actresses currently working, and the chance to see her delve into a rich, difficult role is always appealing.

See the trailer below:

The trail of the tape
Title: Still Alice
Directors: Richard Glatzer, Wash Westmoreland
Screenwriters: Richard Glatzer, Wash Westmoreland
Cast: Julianne Moore, Alec Baldwin, Kristen Stewart, Kate Bosworth
Release date: January 16, 2015
The entire trailer in one line of dialogue: “I can see the words hanging in front of me, and I can’t reach them and I don’t know who I am and I don’t know what I’m going to lose next.”
The entire trailer in one screengrab: 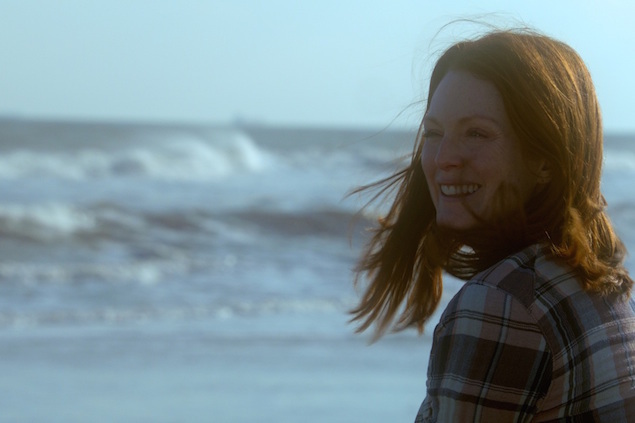 Alzheimer’s is pretty brutal in and of itself, but it looks like Moore intends on wringing every last drop of emotion from her unfussy performance. Kristen Stewart appears to be in fine form as well, with Still Alice the latest in a hot streak of extremely well-chosen roles (Camp X-Ray, Clouds Of Sils Maria, the music video for “Just One of the Guys” by Jenny Lewis) for the Twilight survivor. Moore's speech that runs over the closing images verges dangerously close to schmaltz, but a handful of well-acted roles could elevate this above the misery erotica (miserotica?) that clogs cinemas every winter.