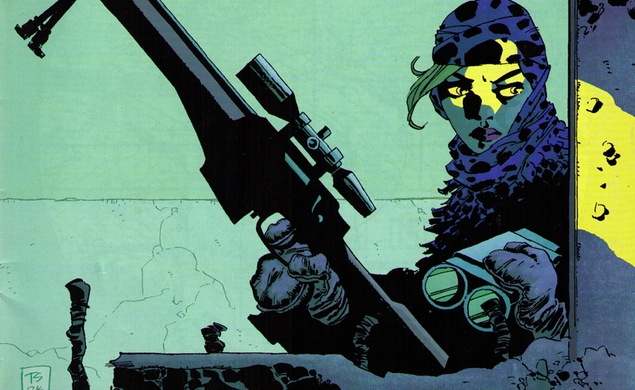 Discerning comic book readers know Greg Rucka’s Queen & Country well. The popular espionage series from indie publisher Oni Comics ran monthly through much of the 2000s and became one of the most critically acclaimed comics of the decade, winning an Eisner Award (comics’ version of the Oscars) for Best New Series in 2002 and racking up numerous additional nominations for Best Series and Best Story.

The main Queen & Country storyline wrapped up in 2007, followed by additional mini-series and prose novels from Rucka, but a feature adaptation has languished in development for years. Now Variety reports there’s new movement on the project, with Ellen Page in negotiations to sign on the play the series’ protagonist, British secret agent Tara Chace, in a Queen & Country film for Fox. The trade’s sources say the story will follow Page as she “tries to stop an international terrorist plot after her identity is compromised and her personal demons spiral out of control.”

After reserving all judgment on Ben Affleck as Batman it would be pretty hypocritical of me to weigh in on Page as Chace at this point. Still, based on the Queen & Country books I’ve read (and I haven’t read every single issue), Page strikes me as a surprising choice. The image of Chace I have from the comics is a good deal tougher than the one Page projects in most of her roles (stellar as she often is in them). To say this part would cast her against type would be an enormous understatement.

Then again, Page did play convincingly brutal way back in 2005’s Hard Candy, as a woman out for revenge against a man she believes committed a horrible act. And seemingly good casting doesn't automatically equal a good performance or a good movie. I didn’t have a problem with Kate Beckinsale as the lead of the last Rucka adaptation, 2009’s Whiteout, and that movie ultimately turned out to be a total mess—further proof that you have to let them make the movie before you judge it.