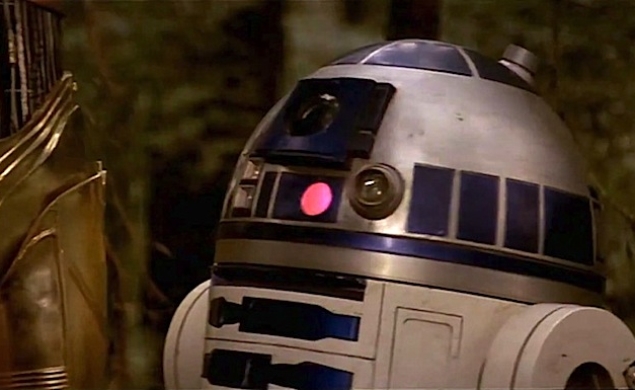 An eagle-eyed io9 reader spotted a fun and potentially argument-starting cameo in Star Trek Into Darkness. About an hour and 17 minutes into the film, as the Starship Enterprise is under attack, a bunch of redshirts are sucked out into the space. Amongst the debris and bodies you can spot an interloper from a competing sci-fi franchise, one that’s also about to be directed by Into Darkness’ J.J. Abrams: Star Wars’ R2-D2.

R2-D2 had already made a continuity-shattering cameo in Abrams’ first Star Trek, so it was basically a matter of time before someone found him hiding in the background of this movie. His first appearance was a cute easter egg for attentive viewers and a nod to the long-running competition between the franchises. I wonder, though, if some Trekkies will react to this shot differently. Even if this cameo was done in the same spirit as the first one, the context for it has completely changed.

Some Trek fans, a notoriously territorial lot, were already smarting over Abrams’ defection to the Star Wars series for its upcoming Episode VII (a position stated eloquently and humorously by my friend Jordan Hoffman). The vote by a bunch of Trek loyalists at a recent convention to declare Into Darkness the worst movie in the franchise’s long and frequently spotty history suggests the extent to which fans are frustrated with not just Abrams’ changes to the series’ canon, but with Abrams himself. Unlike the mystery box-loving auteur, who always seemed hell-bent on turning Star Trek into its more successful space saga cousin, hardcore Trekkies like its mythology specifically because it’s not Star Wars.

Now shoving R2-D2 into Into Darkness could be interpreted as more kiss-off than wink; one last little eff you from Abrams before he packs up and leaves town (even if the exact future of the Trek reboot franchise, with or without Abrams, remains unclear). The intent may remain the same, but the meaning is vastly different. It starts like a Vulcan salute and ends up looking a little bit like the one finger salute.