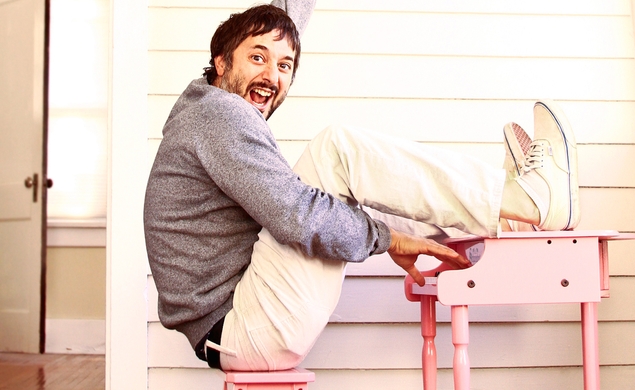 Indiewire Chief Film Critic and Senior Editor Eric Kohn’s new book is called Harmony Korine: Interviews, and it delivers just that: A collection of interviews from the erstwhile filmmaker that span his offbeat career. Edited by Kohn, the collection tracks the director’s early years with Kids and Gummo, through his always-unique and deeply different contributions to the cinematic landscape of the aughts, from Mister Lonely to Spring Breakers. The book includes both new and old interviews with Korine, making it a must-buy for the Trash Humpers fan in your life (read: everyone).

Today at The Dissolve, we’re pleased to present an exclusive excerpt from Kohn’s book, an exclusive (and previously unpublished) interview with Korine from March of 2013. If you want to read more, Harmony Korine: Interviews is available now. Many thanks to the University of Mississippi Press for this excerpt.

Eric Kohn: How do you feel about the way Spring Breakers was perceived?

Harmony Korine: I’ve been so happy about it. It really reached a lot of people. The fact that the film exists the way it does and was seen by as many people as it was makes me really happy. I think more people saw this film than any of my other films combined already.

EK: It grossed more in its opening weekend than any of your previous movies in their entire theatrical runs.

HK: I mean, I don’t know really need validation, but I feel happy that a lot of people got to see the film and that it’ll make things easier going forward when I want to make movies. I think there’s value in that it seems like, for the first time, a different audience saw the film, and was introduced to different types of images and a specific kind of storytelling. That’s exciting to me. It’s exciting to me that a lot of teenagers saw it.

EK: Were you surprised by the teen reactions to the movie?

HK: I had heard that a lot of them were sneaking in. That makes me very happy. Somehow it infiltrated the mainstream.

EK: Teen reactions on Twitter were pretty fascinating—they were all over the place.

HK: I think a lot of them thought it was going to be a certain type of film and then the actual film was completely different. But I knew that was going to be the case. That was part of the desire. It’s so much a part of the total concept of the film. In some ways, you never want the film to end; you just want it to go on. How could I not be happy about that?

EK: Do you have enough distance from the movie to view it outside of the intensity involved in making it?

HK: I don’t know how much thought I even want to give it. I haven’t really even started analyzing it that way. I don’t think I will. That’s the thing—you always want your films to be successful, for people to love them in some way. You want some type of reaction. But I never really know what the hell’s going on. I make the film and once it’s out there I just walk around.

EK: You’re savvier than you give yourself credit for.

HK: I’m thinking it through. This film was made like a piece of pop, so I wanted it to work in that way—in a popular context. It would only really succeed if it was introduced in that way. From the beginning, it was a piece of pop art cinema.

EK: It certainly seemed to be achieving that when Britney Spears tweeted that she was excited to see the film.

EK: The reception may have marked a new period of success for you, but you’re still being perceived in light of your earlier career antics—Selena Gomez and James Franco appeared separately on Letterman to promote the film, and in both cases, they addressed your nineties appearances on the show. How do you feel about that stage of your life still chasing you around?

HK: I’m not trying to shed anything. I’m still connected to that. The only time it’s annoying is when it overshadows the film. But what are you going to do? I don’t really care. I just do what I do. I was living ad- ventures. All that criminal shit was part of the films. All that criminal behavior was part of what I needed to make the art work. At the same time, I just needed to satisfy that side of things for me. I don’t really want to shed that, or distance myself from that. That’s an important part of who I am. At the same time, I’m still not at the point where it’s something I want to talk about now.

EK: What do you mean by “criminal shit”?