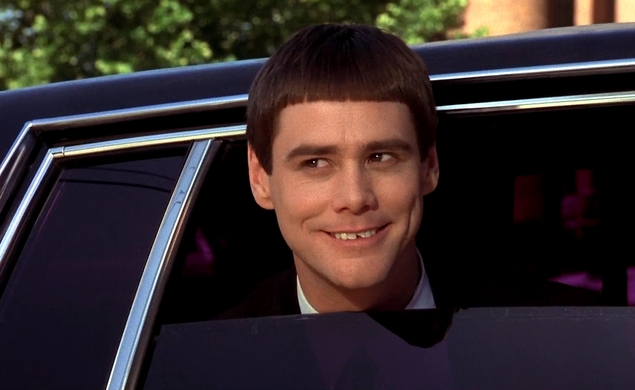 At approximately 5:20 p.m. on Sunday, September 8, 2013, the course of human events was altered forever, when actor Jim Carrey tweeted the following photo:

The photo can mean only one thing: that we are finally, gloriously getting close to the real, actual existence of a Dumb And Dumber sequel.

Released in 1994, the original Dumb And Dumber cemented Carrey’s movie stardom and launched the Farrelly brothers as a major force in American movie comedy. The film, about two bumbling quarter-wits played by Carrey and Jeff Daniels, also spawned an animated series and one of the worst prequels that has ever been perpetrated on the moviegoing public. But none of those were made with the involvement of the Farellys or Carrey and Daniels, which is what gives fans of the original movie hope for this sequel, which does. It is, rather brilliantly, titled Dumb And Dumber To.

The project was first announced in 2011, but scheduling and financing issues have held up production for the last two years. Things looked particularly bleak for our two heroic idiots back in June when Warner Bros. passed on the project, only to take a turn for the less not good when an independent financier acquired the sequel and gave it the greenlight. Production was supposed to start later this month, but after the many years of rumors and false starts you could forgive anyone for feeling skeptical about that.

That’s why that damn chipped tooth is so exciting. It’s a legitimately broken incisor; Carrey cracked it in grade school, and famously removed its cap to give his Dumb And Dumber character, Lloyd Christmas, his distinctively goofy grin. Decapitating that sucker once again means that the sequel is officially go for launch. The eyes may be the window to the soul, but the teeth are the window to the dumb. Or dumber. Production on Dumb And Dumber To begins on September 24.