Kevin Hart and Dwayne Johnson team up for comedy-thriller 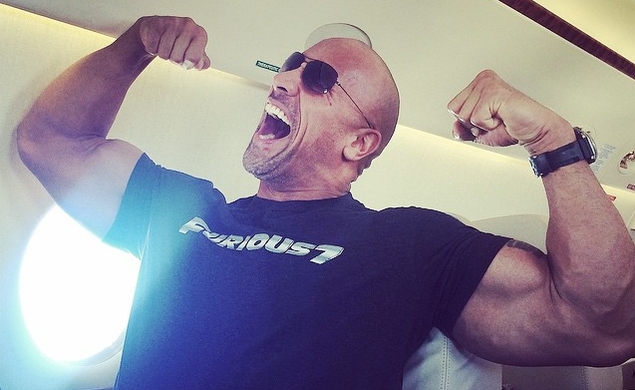 As all new technology inevitably does, Twitter has made life infinitely more convenient but also a little surreal. It’s a great depository for opinions, jokes, and other thoughts, but the real fun of Twitter lies in its egalitarian spirit. We grubby groundlings can tweet to our hearts’ content at the glitterati of the world, and with a little luck, they reply. There has to be a long German word for the feeling you get when checking your phone to see Southland Tales director Richard Kelly responding to a dumb joke you dashed off moments before.

Dwayne “The Once and Future Rock” Johnson and Kevin Hart have put social media to work while drumming up interest in their newly revealed project. First, Johnson posted a video to Instagram referring to himself as “Big Bob” and Hart as “Golden Jet.” Naturally, many assumed that Johnson and Hart are best buds and these are the super-cool nicknames they’ve given one another, perhaps between outings to get frozen yogurt.

Hart then posted a reply to Johnson’s video, saying, “I see you big fella....The world is not ready for what we are about to hit them with @TheRock ......Let's goooooo Big Bob lmao #YallShouldBeAfraidOfWhatWeAreGonnaDoNext #HardestWorkersInTheRoom #NoDaysOff #MyHustlePartner #PuttingUsTogetherIsRidiculous #StayTunedPeople #WeDontStop”. Veritably, putting them together is ridiculous.

The next day, Johnson Instagrammed a photo of himself reading his newest script while grinning and baring his considerable bicep-weaponry. I like to imagine that Johnson strikes a similar pose during board meetings, or while sleeping.

Yesterday, the true nature of the high-profile Johnson/Hart bromance came to light: The pair will star in an action-comedy called Central Intelligence, to be directed by Rawson Marshall Thurber, who enjoyed an unexpected hit with 2013’s We’re The Millers. In a classic odd-couple setup, Hart plays a former high-school football star who’s aged into a life of accounting, while Johnson’s character spent high school getting shoved in lockers. When the two meet at a class reunion, Johnson informs Hart that he’s taken up work with the CIA and needs his help on a top-secret mission. The laughs are already apparent in the casting: The notion that this guy was once tormented by bullies while the 5-foot-4-inch Hart was the big man on campus (so to speak) starts in a pretty laughable place.

/Film claims that shooting will begin in early 2015, aiming for a release date in spring 2016. Moreso than any actor currently working in the action genre, Johnson exudes an undeniable charisma, bringing brawn as well as an affable charm to his roles. If his memorable turn in last year’s Pain And Gain is any indicator, he and Hart will make for excellent comic opposites.