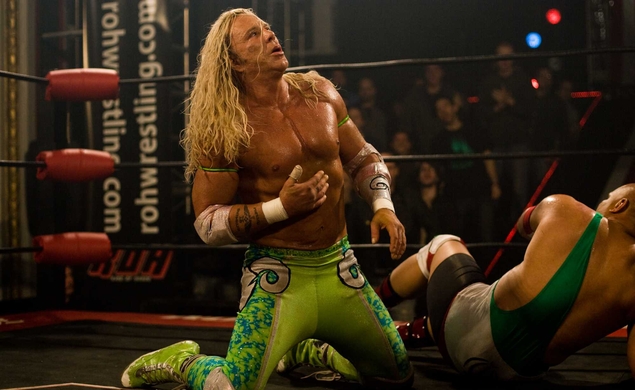 The indie drama The Wrestler stars Mickey Rourke as broken-down ex-star Randy “The Ram” Robinson, a man trying to make amends for a misspent life. Back in 2008, the plot of The Wrestler didn’t immediately sound suited to a visionary, fantasy-oriented director like Darren Aronofsky—but then neither did the plot of Black Swan, before Aronofsky turned that into an improbable hit two years later. With The Wrestler, Aronofsky emphasizes the wintry cold of Randy’s New Jersey home, and focuses on his surgically altered face and chemically altered body (the appearance of which dissolves the lines between Randy and the similarly reshaped Rourke). The Wrestler is too much a simplistic, predictable redemption melodrama, especially whenever Randy is trying to win over his estranged daughter Stephanie (played by Evan Rachel Wood). But Aronofsky and screenwriter Robert Siegel fill the film with telling details of what it means for people to sacrifice their bodies for money. Randy beats himself up with barbed wire, razors, and staple-guns, all in the name of putting on a good show for his dwindling fan-base. This is a sordid showbiz saga elevated to the level of a bloody Biblical epic. The Wrestler airs on HDNet Movies at 8:30 p.m. Eastern, and again at midnight.