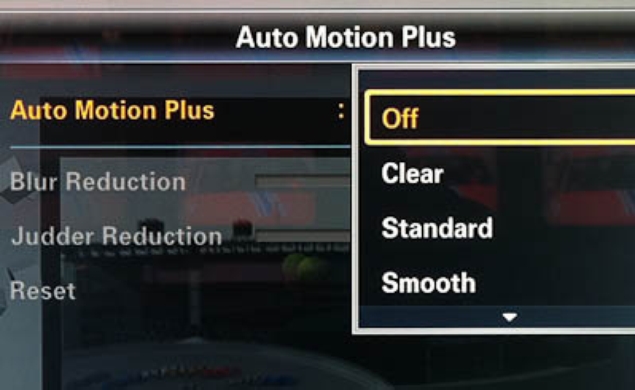 If you’ve ever wondered why the movies you see on your HDTV sometimes look suspiciously like telenovelas, it might be because TV manufacturers use a default “smooth motion” setting on new televisions. According to a new change.org petition created by cinematographer Reed Morano (Frozen River, The Skeleton Twins), motion-smoothing “was an effect that was created to reduce motion blur on HDTVs, but a very unfortunate side effect of using this function is that is takes something shot at 24 fps (or frames per second) or shot on film and makes it look like it was shot on video at 60i (standard video field rate per second for television). In short, it takes the cinematic look out of any image and makes it look like soap opera shot on a cheap video camera.”

In a piece on the issue for Filmmaker Magazine, Morano expands on her problems with smooth motion, while conceding that her profession makes her particularly attuned to differences in visual compositions, writing, “I don’t know if it’s just that I ‘know too much,’ but I can see the difference right away when ‘smooth motion’ is on a TV: it turns me off. It cheapens the look of anything shot at 24fps.” Morano goes on to say she can’t “enjoy any film or TV show when that setting is on. It feels too real. I know it’s not the look the filmmaker intended,” comparing movies shot on film but playing on television in the smooth-motion format to an episode of General Hospital, “A Lifetime movie from the 1990s,” and a “photocopy of a painting.”

Motion interpolation (or smooth motion) is sometimes called the “soap-opera effect” because it makes films look like network soap operas, which are shot on 60i video rather than more expensive film. Morano admits that smooth motion makes a lot of sense when it comes to watching sports, but that it is detrimental to the picture quality of basically everything else that can be watched on a television.

I’m no expert in this subject. I ain’t got no schooling beyond a B.A. from a Big Ten Midwestern university, but I have noticed that on television films do sometimes look like video or television. Morano (who is an expert in the subject) maps out a compelling enough case that when I get home I will try to remove the default smooth-motion setting on my television—although truth be told, I can barely operate my Roku box, so I may ask someone far smarter than me to do it. Morano’s petition to stop making “smooth motion” the default setting on all HDTVs can be read here.

(Addendum: The photograph above was taken by Stu Maschwitz, who’s been fighting the good fight against motion-smoothing for years. His 2011 piece on the subject is essential reading for those interested in knowing more about this abominable “enhancement.” Please read it and start messing with the settings on your relative’s TV set at the earliest opportunity.)