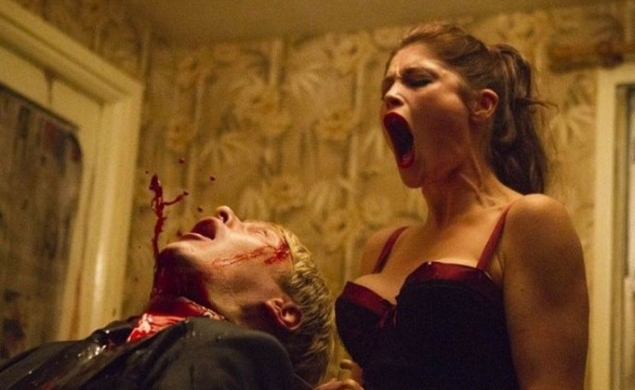 Let’s kick off Halloween Week with a different kind of vampire movie. Neil Jordan’s Byzantium—written by British playwright Moira Buffini—stars Saoirse Ronan as thoughtful teen bloodsucker named Eleanor, who only feeds on the dying, and Gemma Arterton as her mother Clara, who takes her customers’ money and their lives. Jordan and Buffini give Byzantium a story-within-a-story structure, with Eleanor writing and narrating Clara’s long, tragic history, and Clara hearing tales of a mysterious black island and a venerable order of evil. The lore-heavy plot serves a dual purpose: It allows Jordan to make a horror film with visual references to gothic Hammer productions and bloody B-movies; and it allows Buffini to position Eleanor and Clara as feminist anti-heroes, scrapping to find a place in a male-dominated demonic society. This is a movie that starts out seeming slight and overfamiliar, with its biggest twist being how the vampires puncture their victims’ necks (with sharpened thumbnails instead of teeth). But the mythology gets richer and more meaningful by the minute, until by the end Byzantium has revealed a surprisingly complex and beautiful universe. The Movie Channel will be opening up that universe tonight at 8 p.m. Eastern.