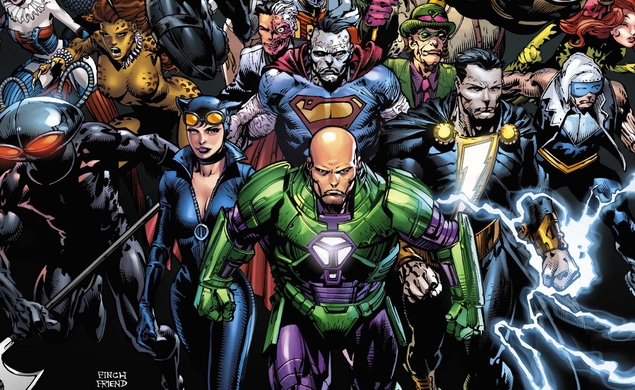 We need a word for the current trend towards cinematic universes. I propose “the universening,” as in “The rumor that Jesse Eisenberg’s Lex Luthor from Batman V Superman: Dawn Of Justice may reappear in Suicide Squad is further evidence of Hollywood’s universening.” That’s not just a theoretical example either; that’s the latest word from Deadline, which reports rumblings that Eisenberg and Warner Bros. are “in discussions” to continue Eisenberg’s portrayal of Luthor in David Ayer’s Suicide Squad, which is due out in 2016.

Deadline doesn’t suggest it’s a done deal by any stretch of the imagination (we almost booted up The Speculometron to take care of this), and notes that Eisenberg already has a busy upcoming schedule that could throw a wrench (made of Kryptonite) into the works:

“This would complicate the expectation that Eisenberg would star in the Todd Phillips-directed Arms And The Dudes. I’m hearing it’s unlikely he would be able to do both. He’s already set to reprise in Now You See Me 2, and this one is a clear priority since Kevin Tsujihara told Wall Street that it would be a 2016 release. There’s also a Zombieland 2 sequel that got some momentum with Dave Callaham writing the draft for Ruben Fleischer.”

To the best of my knowledge (which isn’t encyclopedic in this case, although I’ve read a lot of Suicide Squad), Luthor has never been a member of this team of supervillains turned unwitting soldiers for the U.S. Government. Luthor’s typically portrayed as the guy everyone (except Superman) thinks is a benevolent businessman, and even when he’s evil, he doesn’t have any kinds of super-powers that might be useful to a team like the Suicide Squad. On the other hand, the team usually has some kind of government handler, and there have been comics where Luthor’s become an elected official, even president of The United States in one wacky storyline. So there are ways to imagine it shaking out and making sense, even if they wouldn’t exactly line up with the comic-book versions of either Luthor or Suicide Squad (he said as he shook his fist to the sky in nerd rage).

Continuity complaints aside, it could be kind of cool, particularly if Eisenberg was bossing around a team that included guys like Will Smith and Tom Hardy, both also currently rumored as potential Suicide Squad cast members. Could it happen? Definitely. I mean you have to assume Eisenberg’s got a million dollars, but that’s not cool; you know what’s cool? A billion dollars. He’s going to need to make a bunch more DC movies to get there. Let the universening continue.