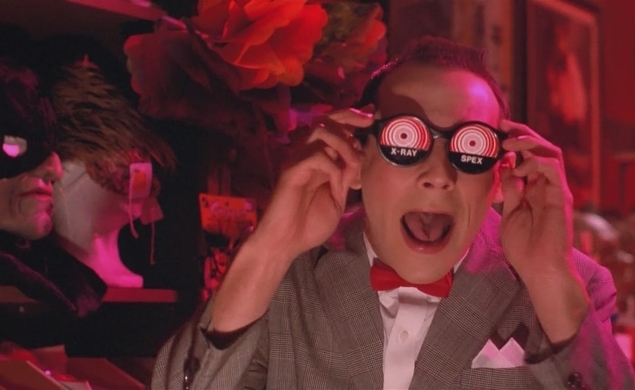 Okay, so last year Paul “Pee-wee Herman” Reubens said the long-awaited new Pee-wee movie was shooting next year—i.e. this year. And it hasn’t happened. In 2013, Reubens told the Los Angeles Times that he had a director attached (to work alongside previously announced producer Judd Apatow) and that it would “continue a comic tradition that many of us ’80s kids remember well from Pee-wee’s Big Adventure.” So far, no such comic tradition has been continued.

In other words, the following news should be taken with a grain of salt (and possibly with a scream, if “salt” happens to be today’s secret word). Reubens is back on the publicity beat hyping the new Blu-ray box set of Pee-wee’s Playhouse. Naturally, Rolling Stone asked for an update on the third Pee-wee movie, and Reubens provided them with an encouraging tease, revealing that “there’s going to be a big announcement any minute.” His full comment:

“It’s been months and months of being right on the verge of being announced… I thought something was going to go public yesterday, actually, and that you’d be the first person I’d be talking about this with. But I’m thinking there will be something made public very soon. It’s going to get made shortly after the new year. I wish I could tell you about it right now, because… I mean, it’s amazing. It’s going to be amazing. It think it first got leaked four years ago or so that the movie was going to be made, and ever since then it’s just been stalling and stalling. So I'm really ready for this to happen. But I’m not kidding: It’s very imminent.”

“It’s going to get made shortly after the new year,” sounds an awful lot like “will likely shoot next year,” which was the Pee-wee party line back in 2013. But lets hope this time Reubens isn’t messing around and that Pee-wee is coming back to the big-screen in the very near future. If he’s wrong, and he’s once again gotten us excited over nothing, that would be like pouring salt in the wound. (“AAAAAAAAAAAAAAAA!”)