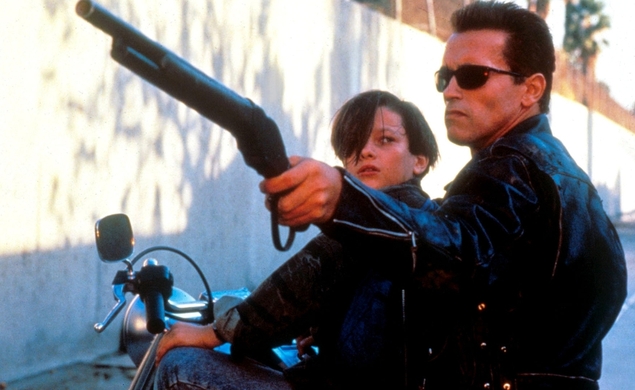 There are a lot of lingering questions about next year’s Terminator Genisys. We still don’t know exactly how this new movie fits into the continuity of the old ones (Jai Courtney recently said the film is neither a sequel nor a reboot), or why in the holy hell they decided to spell Genisys with a ‘y.’ We’re also wondering how 67-year-old Arnold Schwarzenegger could still play a Terminator at his age. Does Skynet’s latest plan for total domination involve infiltrating the ranks of the AARP and putting so much strain on the Social Security system that they bankrupt the economy?

Deadline offers an aswer for that last question. Speaking with Terminator creator and director James Cameron at a 30th-anniversary screening of the film in Los Angeles, he explained that he’d come up with the idea that justifies the Old Terminator that Schwarzenegger plays in Genisys:

“I wasn’t interested in producing it or working on it actively, but I did want to put in a good word for Arnold. I pointed out that the outer covering (of the Terminator) was actually not synthetic, that it was organic and therefore could age. You could theoretically have a Terminator that was sent back in time, missed his target, and ended up just kind of living on in society. Because he is a learning computer and has a brain as a central processor he could actually become more human as he went along without getting discovered.”

Cameron has previously said he is involved in some small way behind the scenes of Genisys, which is directed by Thor: The Dark World’s Alan Taylor, but this is the first specific thing he’s taken ownership of. Cameron didn’t write the script for Genisys (or is that the scrypt?), so it’s possibly the eventual explanation for The TerminatOld will be different than what Cameron said here. But I tend to think it’s going to be pretty close. Still, this raises another question: Will this old Terminator be a good Terminator or a bad Terminator? Will becoming more human make him more compassionate or more of a dick? The latter would actually be pretty cool. “I know now why yoo cry. Now shut yoo-uh goddamn mauff! Yoo-uh giving me a robo-headache. NO, IT’S NAHT A TOOMUH!”